Michigan vs. Notre Dame: The Fantastic Final Match Up At The Big House

I don’t think there is anyway that I could be happier with the way Michigan played against Notre Dame.  Before the Under The Lights II game even started, the atmosphere at the Big House was electric.  There were multiple jets performing flyovers over the stadium, the student section was complete full and the place was loud.  Before the teams came out NCIS’ Mark Harmon was presented with his father’s legends jersey, and Devin Gardner took the field wearing Tom Harmon’s legendary #98.  It truly was Gardner’s night from that point on.

Aside from the horrible throw in the fourth quarter, I’d be willing to say that Devin Gardner played a flawless game.  I have to say I wasn’t a fan of a quarterback wearing #98 and I’ll probably never get used to seeing Gardner in it.  But, he definitely deserves it and he would have made Tom Harmon proud with that performance.  He was in complete control of the offense the whole game, and offensive coordinator Al Borges deserves a ton of credit for the game plan he drew up.

This video has every play Gardner played against Notre Dame and is well worth watching.  Gardner has proved that he can handle the big stage now and he made a lot of fantastic throws.  When he wasn’t making these throws, he was eluding the Notre Dame pass rush and absolutely gave the defense fits.  Here’s his passing chart, courtesy of Draft Breakdown, from the game as well.

That is truly a fantastic passing chart and shows how effective Gardner was all game.  And if that doesn’t do it for you, here’s his stat line:

He also added 83 yards and a touchdown on 13 carries running the ball.  Even though he made one of the worst plays I’ve ever seen in person, throwing that ball from the end zone instead of taking a sack, this game was truly a Heisman performance. 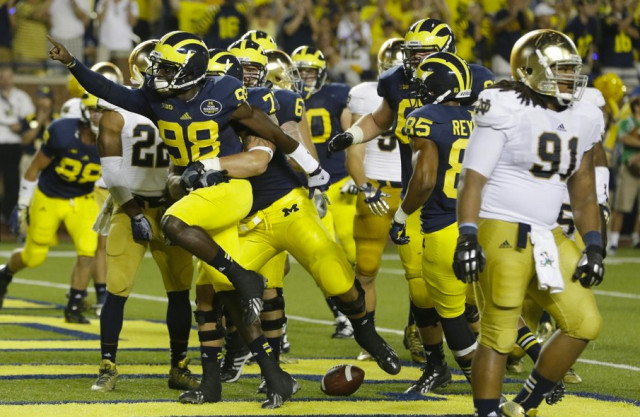 Gardner wasn’t the only player that played well against Notre Dame though.  Fitzgerald Toussaint wasn’t spectacular, but he added a boost to the running game and passing game.  Would I like to see him gain more yards?  Of course, but given how good Notre Dame’s front four is, and how young Michigan’s interior offensive line is, I’m not going to complain about 22 rushes for 71 yards and one catch for 31 yards.  I was a little surprised that Derrick Green didn’t get more touches, but I’m not going to question the Michigan coaching staff on the use of their true freshman players in a huge game.  One can only assume that the true freshman will get significant playing time against Akron and UConn.

The other monster of the night was Jeremy Gallon, who looked like he should be wearing the #1 jersey this year.  Gallon was virtually uncoverable all night and recorded 8 receptions for 184 yards and 3 touchdowns, while adding one rush for 14 yards.  He proved, yet again, that he is the real deal and he will be a key part of the Wolverines thin wide receiver group.  After Gallon, no one else really emerged, but no one had to because the damage he did was simply ridiculous.  Jake Butt did turn in a solid game when he was called into action after AJ Williams got hurt, but again, Gallon was responsible for more than 1/3 of Gardner’s passes and more than half his passing yards.

The block by Jeehu Chesson shouldn’t go unnoticed here.  He took out three players and his blocking has been absolutely exceptional thus far.

I was also very pleased with the offensive line.  Taylor Lewan and Michael Schofield were dominant all night, and Kyle Kalis looked like a future first round pick.  Kalis did struggle at times in pass protection, but considering the level of competition he was going up against, I’m willing to let it slide.  Jack Miller and Graham Glasgow also did a very good job protecting Gardner, and exceeded my expectations.  The fact that Gardner was only sacked twice by a defensive line that has two future first rounders on it (Stephon Tuitt and Louis Nix), and the entire interior offensive line was only playing in their second game, this was a huge positive.  Truly the only major play Tuitt made was the athletic interception in the end zone, while Nix only had one tackle for a loss.  This group will improve throughout the year, but the fact they performed this well against a stout front gives me a lot of confidence in them going forward.

Before evaluating the defense, watch this video.  If you weren’t at the game and missed the halftime show, it was spectacular.

The play on the defensive side of the ball wasn’t pretty, but that was because of the lack of pass rush.  Michigan spent a lot of the game rushing only four lineman, and barely got anywhere near Tommy Rees.  Because of that, and the fact that Rees was firing the ball out quickly, the secondary got gashed quite a bit.  If you give a quarterback time to throw, even a marginal one, he’s going to shred your secondary unless they make some plays.  The only reason that Notre Dame didn’t score more was because of Blake Countess’ two interceptions.  The Fighting Irish only punted the ball twice, so there is still some work to be done on the pass rush.

Out of all the defensive lineman, I thought that Frank Clark and Ondre Pipkins were the only ones that had a good game.  Not to say that the others were horrible, but they certainly didn’t do anything to stand out.  This group truly struggled against an experienced offensive line and unless they improve, defensive coordinator Greg Mattison will have to go back to dialing up a lot more exotic blitzes to get pressure.  Only one sack was recorded (by linebacker Brennan Beyer) and only one quarterback hurry was given to the defensive line (Frank Clark). 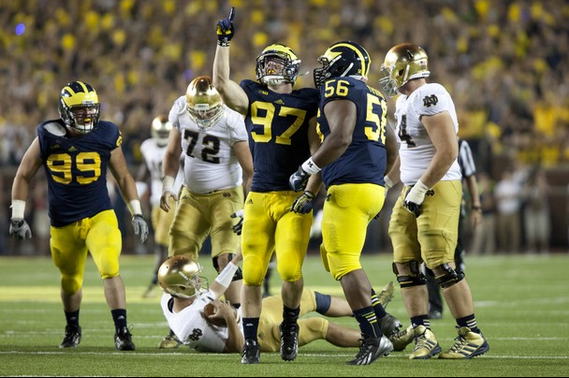 Linebacker-wise I was pretty pleased with the group.  James Ross, Desmond Morgan and Joe Bolden turned in solid performances, with Ross and Morgan adding six tackles each.  Michigan spent a lot of time in the nickel to combat against the three-wide sets that Notre Dame was using, so they didn’t use too many of their linebackers.  What this unit really misses is Jake Ryan.  Adding Jake Ryan into this group will not only improve the linebackers, but it will help with the pass rush tremendously.

The secondary I thought played fantastic considering how much time Rees had to throw the ball and how quickly he was getting it out of his hands.  Raymon Taylor was picked on a lot, understandably so because Countess is a monster, but Taylor did a good job not giving up any massive plays and ended up making 11 tackles.  Delonte Hollowell looked much improved and only missed one tackle that I saw, a major improvement over the Central Michigan game.  I wondered why Channing Stribling didn’t get more playing time, but Hollowell did a very good job in his place.  Thomas Gordon and Jarrod Wilson turned in solid, unspectacular performances, which is fine by me.  Gordon did have seven tackles, but that was mostly in run support.  The defense did a good job of bending, but not breaking, considering they gave up 410 total yards and were only responsible for 23 of the 30 points.

This performance makes me believe that Michigan is going to be dominant this year, but they play the games for a reason and one game doesn’t guarantee success.  I probably won’t post about the Akron and UConn games, because I’m expecting more dominance like the Central Michigan game.  Brady Hoke really has done a fantastic job with this team so far.

Box Score from the game