This is obviously the last poll prior to the bowl games, and some of the entries are just astonishing.  Thank god the AP Poll is no longer a part of the BCS Standings…it’s just too bad that the computer polls and the Harris poll aren’t a whole lot better.  Even though they’re going to a 4-team playoff, I’m not sure they’ll ever be able to fix the ranking system. 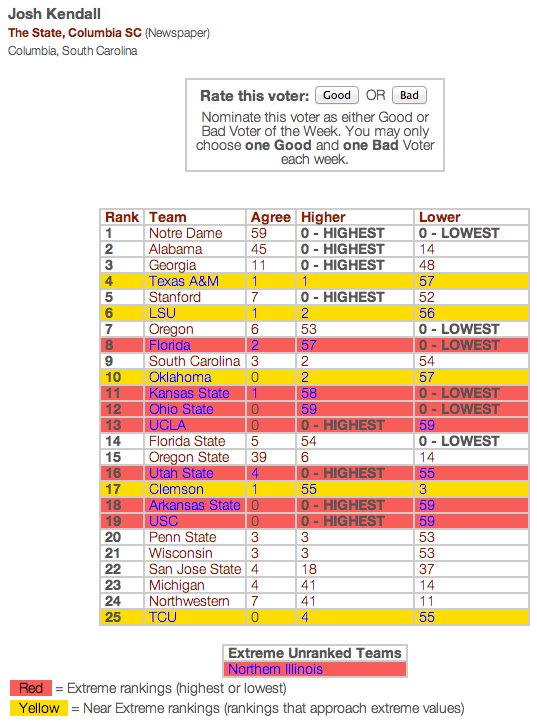 Before I start critiquing this Kendall’s poll, I gotta say that he did an absolutely outstanding job with where he ranked Northern Illinois.  They lost to Iowa, end of argument.  Also, putting Georgia #3 was a pretty good job on his part, seeing as they barely lost to Alabama, and probably should have won.

That’s about all I can say compliments wise.  He grossly overrates Texas A&M, Stanford, UCLA, Utah State and Arkansas State.  In the grand scheme of things, it doesn’t matter now that we’re into bowl season and he at least got the top two right, but who did Utah State or Arkansas State beat to deserve being ranked in the Top 18?  Arkansas State lost to Nebraska by 29 points, and he doesn’t even have Nebraska ranked, so how does that work? I mean even USC at #19 is overrated at this point, they have 5 losses.

Meanwhile, he underrates Florida, Kansas State and Ohio State.  Kansas State had one loss all year, and beat Oklahoma, yet they’re rated lower than Oklahoma?  Ohio State went undefeated and Florida only had one loss, and that was to his #3 rated team…how do they not deserve to be rated higher?

Same old Ray being absolutely ridiculous with his non-AQ team rankings.  Northern Illinois, Boise State, Kent State, Utah State, all grossly overrated.  You could even make an argument that San Jose State and Tulsa are as well.  For some reason this guy loves these teams even though they never beat anyone that’s any good.  How is a team that lost to Iowa ranked #14?  It’s like he was hoping people would see his poll, and rate them higher to get them into the BCS.  It’s comical.  How does he think that Michigan wouldn’t stomp these teams?  Based on his poll Michigan lost to #1, #2 and #3, so how does Michigan not get any credit?  Sure they didn’t win those games, but it’s not like 3 of their 4 losses were to complete gongshow teams that are unranked.

We have a newcomer here and he decided to make an absolute splash in his first appearance in the AP Poll Olympics.  I mean seriously, was this guy on drugs?  Alabama #4? On what grounds?  How is Florida ahead of them?  They didn’t even win their division in the SEC.  Then Georgia drops to #12? How?  They beat the #3 team in his poll.  How is that logical?  Oregon State at #13 too, while Nebraska checks in at #17 after getting obliterated?  Nebraska isn’t terribly overrated, but they should be 20th at the max, even I thought I overrated them when I put them at #20.  There are simply just not enough good teams this year.  Then finishing off the poll by adding in Northern Illinois, Utah State and San Jose State from #19-21, just atrocious.  These schools shouldn’t be ranked.

I just can’t get over where he put Alabama, Florida and Georgia.  How can you screw your top 5 up this badly?  What are they putting in the water in Reno?

And of course, to finish things off here’s my poll: