In a year with as much depth as this, there are far more “winners” than there are “losers.” I put that in quotes because obviously it’s going to be 2-3 years before we actually know which teams ended up with a good draft or not. At any rate, in a draft this loaded, I’m going to try to keep the number of teams here limited, because it’s tough to pick out any truly bad ones.

This may be cheating a bit, but the Patriots used their draft picks in an unbelievable fashion. Sure, they did not pick in the first or second rounds, but they were able to acquire Brandin Cooks and Kony Ealy, two established pros. Quite frankly, the receiver they could have gotten at 32 is not nearly as good as Cooks is.

How the #Patriots used their 2017 picks: pic.twitter.com/cCpaPP2LDE

On top of that, Derek Rivers ended up falling right into their laps which is a feat in and of itself. He’s got a lot of potential as a pass rusher. Then you add the trade to get Dwayne Allen and it’s like the Patriots are basically cheating. So you basically got three starters with your first five picks and a high-end potential defensive end with one of your actual picks. Bill Belichick is out here playing Monopoly while the rest of the NFL plays tic-tac-toe. It’s almost as if the other teams in the NFL do not care that the reigning Super Bowl Champs had the best offseason in the league.

(After the Patriots, the rest are merely in alphabetical order.)

The Cardinals were a bit of an enigma last year. They were a team that was far more talented than their record and I will expect them to bounce back rather quickly…especially after this draft. Haason Reddick is an instant plug-and-play starter that I would have loved for the Lions to get. Budda Baker is a playmaking safety that is going to make for a potent defensive backfield with Tyrann Mathieu and Patrick Peterson. Losing Tony Jefferson in free agency obviously hurts, but they at least did the prudent thing and tried to address it.

The receiving core is quite deep so I would not expect Chad Williams to have a major impact this year, but he’s a guy that could be a contributor down the road. Dorian Johnson would have been a second round guard if he did not have a Liver condition and I think he’s going to be a Day One starter on their offensive line. You get all of that with your first four picks and then add T.J. Logan to be a great change of pace back for David Johnson with Andre Ellington’s move to wide receiver and you’re in a pretty good spot.

The Baltimore Ravens clearly wanted to address their defense and their offensive line, literally drafting zero offensive skill position players. Not only did they do a good job of addressing needs, they got some very good players. All four of their first four picks are potential starters. Marlon Humphrey is a great corner to add to their starting tandem of Jimmy Smith and Brandon Carr. Humphrey is an athlete with some technique issues, but he’s in a great position to have some time to develop and not be expected to be an impact corner right away.

Tyus Bowser is an explosive pass rusher and while he’s a bit raw, he has all the characteristics that could make him a very good pass rusher. Learning from Terrell Suggs will certainly help his development. Chris Wormley is a versatile defensive lineman and he will likely line up at multiple spots on the line and contribute in the rotation right away. Tim Williams is similar to Bowser that he has fantastic traits to be a great pass rusher and be a pass rush specialist as a rookie.

Absolutely love what the Browns did with their draft and I think they’re better off that they did not chase a quarterback early in the first round. DeShone Kizer fell into their lap in the second round and was worth taking a chance on at that point and drafting him would not impact their ability to draft a quarterback early next year if(when) they’re bad again. Myles Garrett was a no-brainer and he is poised to be an absolute stud. Taking Peppers gives them an intriguing playmaker immediately in the return game and potentially a starting safety. I like the David Njoku pick, because it gives them a playmaker at the tight end spot and will help their passing game. I know I was very anti-Njoku for the Lions, but that’s not because I hate Njoku, it’s because I do not think the Lions need two Eric Ebrons.

Larry Ogunjobi gives you a very raw defensive tackle prospect, but he has physical traits that you want in a DT. He’s pretty much a poor man’s Sheldon Rankins right now. I was writing this prior to Howard Wilson breaking his kneecap, so I was going to say that he was an intriguing player that would contribute right away with the lack of depth in the Browns secondary but you can forget that. I still think with his prototypical size and ball skills that he will be a good player when healthy. And since Caleb Brantley’s charges have been dropped, the risk they took will end up paying off for them…they get a second round talent in the 6th round. That being said, who knows if he’ll stay out of trouble for the rest of his career. 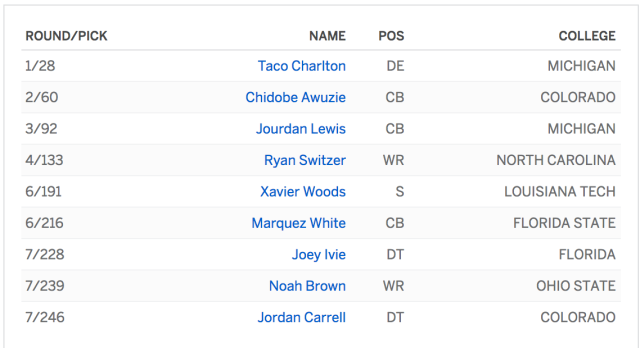 The Dallas Cowboys may have had my favorite draft of any team this year. If you had given the Lions this draft, I would have been pretty intrigued (though linebacker would still be a major issue). Taco is just scratching the surface of his potential and he’s got all the makings of being a stud pass rusher. Chidobe Awuzie is a corner that I wanted the Lions to take over Teez Tabor…Awuzie is a good athlete with solid size and he’s very sticky in man-coverage. Then the Cowboys took Jourdan Lewis, who will be an impact starter at slot corner if his legal troubles are behind him.

Adding Ryan Switzer in the 4th round gives you a shifty slot wide receiver to create mismatches away from Dez Bryant, as well as a starting punt returner. Xavier Woods was an absolute steal in the 6th round…he has fantastic instincts and ball skills. Noah Brown is an intriguing 7th round pick. While he’s inexperienced, he’s got great size and is a good depth, possession wide receiver to add in the mix.

The Colts first three picks were absolutely outstanding. It went a bit off the rails with a major reach in the 4th with Zach Banner, but the first three players all fell right into their lap and they just kept hitting home runs. Malik Hooker is a tremendous safety and is going to be a great addition to their defensive backfield. Then you add in Quincy Wilson, with his prototypical size and cover skills and you have two Day One starters in your defensive backfield. Tarell Basham is going to be a solid backup right from the get-go and he could develop into an impact pass rusher. He has work to do with his pass rush skills, but he has the NFL build and athleticism to be successful. 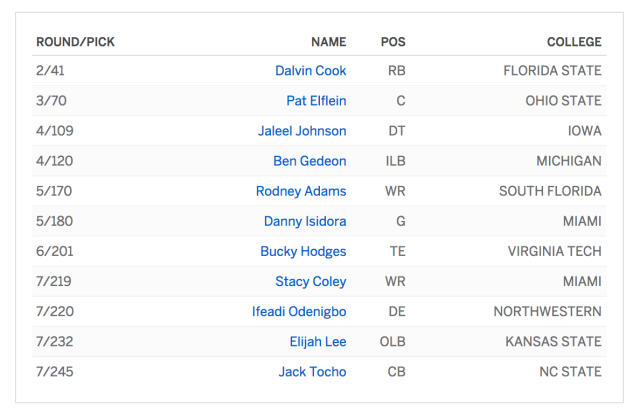 The Vikings did not have a first round pick from the Sam Bradford trade, which in my mind signaled that they’re unsure of when Teddy Bridgewater will be healthy again. That being said, what they were able to do without a first round pick was impressive. Dalvin Cook has some off-the-field issues and had a horrible Combine, but Cook and Latavius Murray make for a more than solid duo to replace Adrian Peterson. Pat Elflein gives you a Day One starter at center, which is a must with putting Mitch Berger at guard.

Jaleel Johnson and Ben Gedeon gives you great depth in the middle of your defense and I think that Johnson could develop into a starter. Gedeon has the brain and physical abilities to start at middle linebacker, but he can be a liability in coverage, so I think he’ll mainly be a backup/special team hero to start his career.

The Vikings then wanted to add some receivers to the mix and got Rodney Adams, Bucky Hodges and Stacy Coley. Which of those three contributes early on is up in the air, but those are three capable players that will provide instant depth. Bucky Hodges may be listed as a tight end, but do not kid yourself, he’s a wide receiver. Elijah Lee was one of the biggest Combine snubs and his athleticism will help him make the roster as a special team contributor right away. He could eventually develop into a starter if he gets the right coaching. 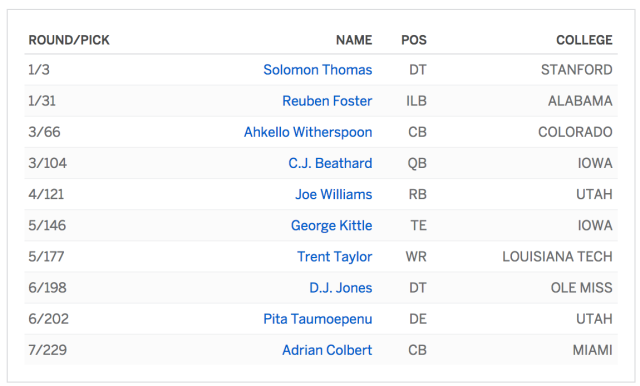 The San Francisco 49ers immediately became draft winners when they robbed the Chicago Bears blind and then got Solomon Thomas. Then to top it all off, they said they would have taken Reuben Foster if the Bears had taken Thomas. So they were able to trade up and get Foster and now you have two instant Day One starters on your defense. This roster is very much a work in progress, but those were two key additions to their defense. Ahkello Witherspoon was another corner that I wanted the Lions to take, he’s 6’3″ with 4.45 speed and a 40.5″ vertical. He’s not perfect in coverage, but you cannot teach that type of athleticism at that height.

C.J. Beathard was a major reach in the third round and I’m not a fan, but I guess that’s the 49ers problem now. Not that it matters much because if they’re picking early next year, they will absolutely draft a quarterback. Beathard is not talented enough to deter the from one of the big three quarterbacks next year.

After that little hiccup, they rattled off Joe Williams, George Kittle and Trent Taylor, which was fantastic. Joe Williams is an intriguing player, with starter potential, and will be a good backup behind Carlos Hyde. George Kittle is an extremely athletic tight end and will make for a great addition to the offense. Taylor is an undersized wide receiver and does not have great athleticism, but he catches literally everything. No doubt a nice little security blanket for your quarterback.

The Titans draft was a very polarizing one because they took Corey Davis so early. I think Davis is a #1 WR, but when you take a wide receiver at #5, typically you expect him to be Calvin Johnson, Julio Jones, A.J. Green, etc. I do not think that’s the type of player he will end up being, but he’s certainly better than any of the wide receivers they would have gotten at #18. So getting Corey Davis and Adoree Jackson with your two first round picks is very solid in my book. Adoree has unbelievable athleticism and will return punts right away. Clearly they wanted to get Marcus Mariota some more toys to go with Demarco Murray and Derrick Henry, because they went with two more pass catchers after Adoree. Taywan Taylor is a slot ninja and is going to be a contributor right away. Jonnu Smith has a ton of athleticism, and it will be interesting to see how the Titans use him as a rookie. He definitely could be a matchup nightmare for defenses especially as he develops.