This was one of the few years where I did not really see a lot of drafts that I did not like. I think a lot of teams did a good job (on paper obviously) and I would say that it’s tougher to pick a top 5-10 than normal. I probably said that last year, but whatever, it’s true. Also, here’s your yearly reminder not to overreact to a player your team picked, unless it is a punter or your team trades up into the second round to draft a kicker (lol Bucs).

@Nickilishious just remind folks to not over react on who their team pick…JJ Watt 11' Draft for example lol pic.twitter.com/1AvddpsW1H

It’s okay though, we’ve all been that guy. I hated the Ziggy Ansah pick and now I think he’s a stud. Live and learn, I suppose.

The Jacksonville Jaguars absolutely knocked this draft out of the park. To get Jalen Ramsey and Myles Jack with their first two picks was absolutely money. At one point Ramsey and Jack were discussed as Top 5 picks and they ended up with both because of injury concerns. Now Ramsey has a slight meniscus tear that was announced on Thursday, but that does not make this a bad pick. He’s going to be an impact player as soon as he gets on the field and the same goes for Jack. Add in the fact that they are getting Dante Fowler back and this defense is basically adding three top 5 picks to their back defense.

I did not love the Ngakoue pick because of his wildly inconsistent motor, but Sheldon Day in the 4th and Brandon Allen in the 6th were some major value picks. It’s amazing that 6 out of 7 picks were defensive players. You can tell that the Jaguars clearly think that their deficiency is defense and that they are trying to focus on it and correct it as much as possible.

This is an excellent example of how you trade down and acquire picks and then trade up for a guy you want and move around the board. They took their batch of picks and used them in a very effective manner. The Conklin pick was a great pick in my eyes because he can slide in at RT and it allows Taylor Lewan to stay at LT because he refuses to move. Dodd and Johnson are going to infuse some young talent into the defensive line immediately and Henry gives you a monster talent in the backfield to go with Demarco Murray (obviously they don’t like Bishop Sankey).

I also really liked the Tajae Sharpe pick, he ripped up the Senior Bowl and caught my eye at the Combine. He’s not going to be some unbelievable gamebreaker, but he gives Marcus Mariota another weapon and he can make some big plays after the catch.

This draft by the Ravens is arguably one of the greatest 4-7 rounds of all time. The Stanley pick was a great pick in terms of getting a franchise left tackle to protect Joe Flacco. I think Laremy Tunsil is a better player, but obviously the Ravens did not care for his off-the-field issues. I’m not the biggest Correa and Kaufusi fans, but they will help out the defense early and often. Five picks in the 4th round is absolutely unheard of and they used them almost to perfection. I liked the Tavon Young and Alex Lewis picks, but absolutely loved the Willie Henry and Kenneth Dixon picks. They got a highly underrated DT that is on the rise and Dixon is one of the top 5 running backs in this class. Then they went on and added Matt Judon, who I think is one of the true sleeper defensive ends of this draft. They filled a lot of needs and did it with a lot of good players in value spots. This was a great draft for the Ravens. 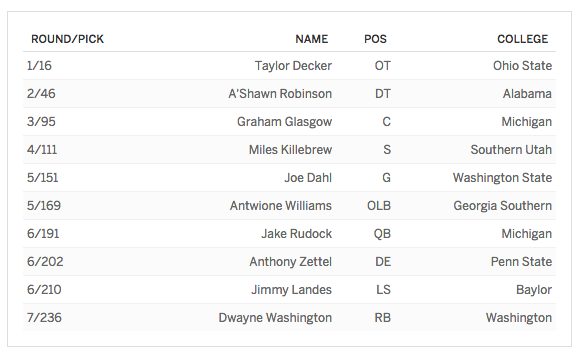 It’s been over two weeks and I still really like this draft…that’s a good sign. If you want to read more in-depth on this you can click here.

The Green Bay Packers are very, very good at drafting. Kenny Clark fills a need on the DL that was created when BJ Raji retired. Jason Spriggs adds depth at offensive tackle and more importantly, is a scheme fit that will protect the most important player on the team. Then they went ahead and worked on rebuilding the linebacker core and found themselves two linebackers that fit in their 3-4 system. I would expect Blake Martinez to work next to Jake Ryan in the middle with Fackrell getting into a rotation with Nick Perry behind Clay Matthews and Julius Peppers. Peppers and Perry are entering contract years (and Julius is old as hell) so it’s good to bring in a young pass rusher with talent to create competition and most importantly, replenish your roster.

Shaq Lawson may have had questions about his shoulder and he does need surgery but it’s nothing that is going to end up being long-term. I love the Lawson pick and think he’s going to be a great fit on defense. Reggie Ragland might be one of the greatest scheme fit draft picks in the entire draft and his brain is going to make him a leader on the defense very early on. Adolphus Washington is a disruptive force and will help open holes for guys like Ragland and create space for Lawson. The Cardale Jones pick was interesting because by the time he’s ready to start, Rex Ryan and co. could be fired but he’s a guy with talent that could develop into something or turn into nothing…really a no-risk pick at that point in the draft. Then Williams and Listenbee ended up being great value picks that will help out the offensive depth going into next season. A very good draft that filled needs.

They only had 5 picks but they drafted 4 players that I liked a lot and one guy from Canada I know nothing about. All in all we’ll call this a very, very good draft. Rankins is a guy that I absolutely love and was sad that the Lions did not get him. He’s an absolute monster and reminds me a lot of Aaron Donald (though likely not as good). Michael Thomas is going to be a great player to go opposite of Brandin Cooks and they should create a great pair of size and speed. Vonn Bell is stud safety that is going to go great next to Kenny Vaccaro and Daniel Lasco is a highly underrated RB. He could end up taking snaps away from CJ Spiller, who seems to have trouble staying healthy. If you’re going to have this few of draft picks, it’s crucial to get players that will have an impact at need positions and I think that their first three picks will be Day One starters. 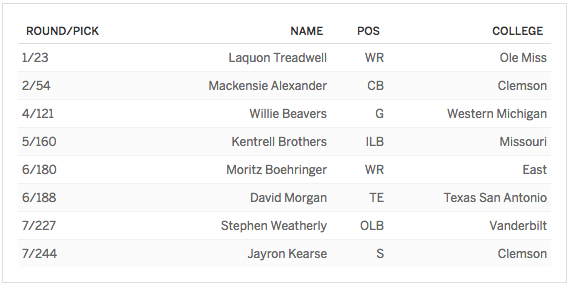 The Minnesota Vikings drove me absolutely nuts in the draft by taking a lot of players that I liked. Treadwell is the best receiver in the draft (in my opinion) and is going to be a great option for Teddy Bridgewater and a great compliment for Stefon Diggs. Mackensie Alexander slipped because he is smaller and did not have a college interception but I like him. Willie Beavers is a bit of a project but for a 4th round pick, the value is right. Kentrell Brothers was an efficient player in college and will be a good depth player, while David Morgan will jump right in as a blocking tight end and will help open holes for Adrian Peterson. Weatherly’s value is in his freak athleticism (6’4″ 267 lbs 4.61 40) and his ability to line up anywhere. Quite frankly, I thought he would go sooner because of his considerable talent but he just never produced. Kearse will be a good depth safety that needs to improve on his effort and his ability to help in the run game. All in all though this was a great draft. Don’t love the Boehringer pick, but oh well….can’t love them all.