Michigan vs. Indiana: Breaking records and giving up too many points 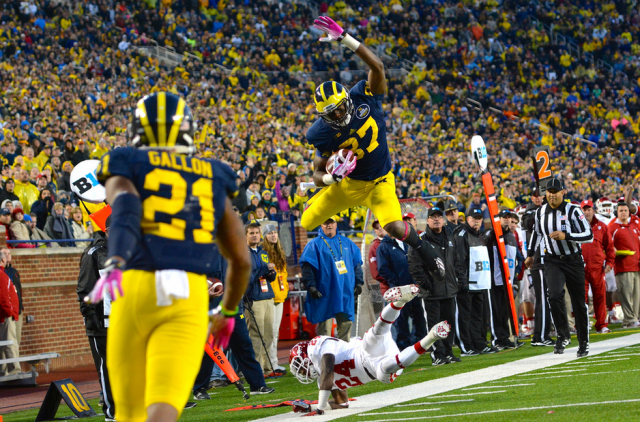 The offensive explosion by Michigan was a refreshing sight to see, even if it was only against Indiana.  Obviously what Devin Gardner and Jeremy Gallon did was beyond impressive, no matter the opponent.  To throw for over 500 yards and to add 81 yards on the ground with 5 touchdowns and 0 turnovers (I credited the fumble to Fitz) is easily the best performance by a quarterback in Michigan history.  Jeremy Gallon, not only had the best performance in Michigan history at wide receiver, but he had the best performance in Big Ten history.  Gallon’s 369 receiving yards on 14 catches was even 47 yards from breaking the NCAA record, which is simply ridiculous.  The Indiana defense was so preoccupied with trying to contain Devin Funchess, that they clearly forgot about Gallon.

It’s tough to evaluate the offense after a game like this, Gardner and Gallon had monster days, but it’s not too difficult to find the open receiver when the defense is doing a horrendous job covering him.  The play calling was greatly improved and Fitzgerald Toussaint was extremely effective running the ball, but I’m not sure this indicates any sort of change going forward.  32 carries for 151 yards and 4 touchdowns is no accident and Fitz did a better job at finding holes, but Michigan State’s run defense is probably the best in the country.  Derrick Green showed some flashes during his 6 carries for 21 yards and I’m surprised that they didn’t use him more. 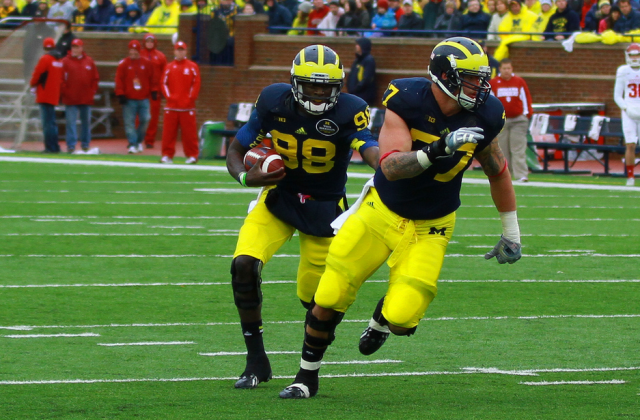 Of the 21 passes Gardner completed, Gallon and Funchess combined for 18 of them, so the ball didn’t get spread around much.  Funchess only had 4 receptions, but still managed to put up 84 yards for another solidly productive day.  Jeehu Chesson had another solid day blocking, but it would have been nice if he could have gotten a few more touches.  Obviously when Gallon is as open as he was against Indiana, there is no point in spreading the ball around.

The offensive line saw some serious changes with Erik Magnuson moving from backup right tackle to starting right guard and Joey Burzynski moved to starting left guard.  Burzynski ended up tearing his ACL so he wasn’t in there long and was replaced by true freshman Kyle Bosch.  Bosch looked fantastic at left guard and dominated the Indiana defense.  His first real test will be how he performs against Michigan State, because it is tough to be overly optimistic after a dominating performance against Indiana.  Magnuson did pretty well at right guard, but he didn’t have a spectacular day.  I’m hoping that Kyle Kalis will get it together so that he can replace Magnuson, but that won’t happen before the Michigan State game.  Graham Glasgow had a decent day against Indiana, nothing spectacular, but he is very obviously an upgrade over Jack Miller.  At the tackle spots, Taylor Lewan and Michael Schofield straight up destroyed the Indiana defense.  They treated Indiana’s defensive ends like they were high schoolers and hopefully it will give them some more confidence going into the big game against State.  The play of the offensive line is likely to determine the outcome of this game.

With AJ Williams suspended for the Michigan State game, arguably Michigan’s best blocking tight end, I’m hoping that Michigan will have fewer plays under center against the Spartan defense.  MSU’s defense is no joke and the Michigan offense is going to have their hands full.  A healthy dose of the read option and spreading the field should help the offense, but going under center and letting the MSU defense load the box will cause issues, because duh.  If they bring in Kalis as a sixth offensive lineman, it may help Michigan run the ball, but more than likely it’s just going to tell the MSU defense what is coming and will result in a blown play.  If you couldn’t tell, I’m very concerned about Michigan’s interior offensive line going up against the Michigan State defense.

Meanwhile, the Michigan defense was flat-out awful; thank god there was a bye week after this game.  This was easily the worst performance I’ve seen out of a Greg Mattison coached defense since he has been here.  Giving up 572 yards and 47 points to Indiana is beyond brutal, the team was clearly not ready to face this spread offense.  Whether it was the play calling, the players inability to cover Indiana’s speed, or the players taking their opponents lightly, it was ugly.  The only good news is that Michigan won’t have to deal with Michigan State running an offense like this but it causes concern for future matchups with Nebraska and Ohio State.  The defensive line was terrible with the exception of Willie Henry, Frank Clark and Quinton Washington.  Willie Henry played very well and should be starting opposite Jibreel Black, he’s easily the team’s best run defender.  Quinton Washington played well, but didn’t play much, so it remains to be seen what he can do with a bigger workload.  Frank Clark had an average day, nothing great and nothing terrible, but he needs to play a lot better against State.  Clark is supposed to be the best pass rusher on the defensive line and he only had one sack against Indiana.  Mario Ojemudia, Chris Wormley, and Jibreel Black had very forgettable days, but I expect Black to rebound.  Black is very clearly the teams best defensive tackle, who likely just had an off day.  Ojemudia and Wormley are young and they’re learning, but they should be able to dominate Indiana’s offensive line.

The linebacking core had a solid day, with Jake Ryan and Desmond Morgan leading the way.  Ryan looked closer to back to being his old self and I’m hoping that he is ready to start and play a full game against MSU.  James Ross had an average day while Joe Bolden was terrible again.  Bolden has seriously regressed this year and each week it seems to be more of the same, which is not a good sign.  I remember seeing true freshman Ben Gedeon on the field a few times, and the coaching staff said he is now in the linebacker rotation.  I don’t remember whether he played well or not, but I do know that if Gedeon is getting snaps in at linebacker, they are clearly not happy with Cam Gordon, Brennan Beyer or Joe Bolden.  Gordon lined up at defensive end more than he did at linebacker and I don’t remember seeing Beyer on the field at all against Indiana.  Perhaps they will move Beyer back to the defensive end rotation, with Gordon, if Gedeon starts to get more snaps.

The secondary had a bad day, to put it lightly.  Raymon Taylor and Thomas Gordon were the only ones who had good days, Gordon obviously because he had 2 interceptions.  Blake Countess had a solid performance, nothing great and nothing terrible, while Channing Stribling was just bad.  Stribling shows so many flashes of potential, but he is just not strong enough yet.  He had an interception taken out of his hands and missed some tackles, which both issues will be corrected with more time in the weight room.  Stribling is going to be very good, and he is clearly better than Courtney Avery, Delonte Hollowell and Jourdan Lewis right now, he’s just having some issues with strength as a true freshman.  Jarrod Wilson had a bad day at free safety and was even replaced by Avery, who wasn’t much better.

The defense got gashed and while there were some players who played pretty well, as a unit they were bad.  Michigan State’s offense looked good last week against Illinois and this week could cause some problems.  I would make MSU QB Connor Cook throw the ball a lot, and try to make him beat you.  The defensive line is going to have to get it together rushing the passer and the secondary is going to have to play much better.  Hopefully MSU’s wide receivers will continue to drop the ball and help out the Michigan defense.  It’s tough to evaluate MSU’s offense because it’s so wildly inconsistent.  If Michigan’s defense plays like it did every week this year except for the Indiana game, they will have no problem shutting down the Spartans offense.

Special teams wise, Brandon Gibbons had another kick blocked because he kicked it too low and it seems that freshman year Gibbons is back.  His confidence is clearly shaken and this is not a good sign going into such an important game.  Dennis Norfleet had some very good returns against Indiana, and one awful one when he was trying to make a big play.  Hopefully Norfleet can finally break one against MSU, it’s about time for him to finally break one and take it to the house.

I’m concerned about this weekend’s game, mainly because Michigan’s offense is ridiculously inconsistent.  I think the Michigan defense will rebound and be able to shut down the Michigan State offense, but the MSU defense concerns me.  The offensive line is going to have to play very well and Gardner is going to have to avoid turning the ball over.  If Gardner doesn’t turn the ball over, Michigan could win by two touchdowns.  If he turns the ball over, all hell could break loose for Michigan.  Al Borges is going to need to spread the field and use Gardner’s athleticism to their advantage.  If they spend the whole time trying to run the ball from under center, they won’t put up more than 10 points.  In the end, I think Michigan’s offensive talent will be able to make enough plays against the Michigan State defense to get a few scores, while Michigan State’s offense sputters and Michigan pulls out the win in East Lansing.