When the Big Ten released their conference schedules for 2018 and 2019 on Wednesday, there was oversight with the PDF that was attached.  Apparently they leaked games that had not yet been announced, including a home-and-home between Michigan and UCLA in 2022 and 2023 and a neutral site matchup with Florida in 2017.  Michigan confirmed the matchup with UCLA this morning, appearing to cut their losses on waiting to announce it.

Michigan has also yet to announced their matchups with Cincinnati and Air Force in 2017 and SMU in 2018.  I personally am excited to see the Pony Express come to Michigan, and like that Dave Brandon is scheduling a fair amount of games against teams that Michigan hasn’t seen in a while.  The schedule he is putting together is far better than rotating through Eastern, Central and Western Michigan.

The neutral site matchup with Florida will be one of the marquee games, either at the Cowboy Classic or the Chick-fil-A Kickoff Game.  By the way, you can tell it’s a neutral site game because it says “vs. Florida.”  Otherwise it says “at” for a road game and it is left blank for a home game.  The Cowboy Classic has future games announced for 2014 (Florida State vs. Oklahoma State) and 2015 (Alabama vs. Wisconsin) but have yet to announce anything beyond that.  The same goes for the Chick-fil-A Kickoff Game which has Ole Miss vs. Boise State and Alabama vs. West Virginia in 2014 and in 2015, Auburn and Louisville.

If I had to guess I would expect that Michigan will play Florida in the Chick-fil-A Kickoff Game.  Dave Brandon wants to expand the footprint that Michigan has and playing a neutral site game in a new area would do just that.  Oh and by the way, the Chick-fil-A Kickoff Game takes place at the Georgia Dome in Atlanta.  By March 2017, the Atlanta Falcons new $1 Billion stadium is projected to be finished and the Georgia Dome is going to be demolished.  If I know Dave Brandon’s style, Michigan will play Florida in the Chick-fil-A Kickoff Game at the Atlanta Falcons brand new stadium, and it will be amazing.  Watch this video to see some of the renderings and this video check out some of the features it will have.  It’ll be a must-have ticket for Michigan fans.  Of course, now that I’ve convinced myself that’s where this game is going to happen, they’ll probably play Florida in the Cowboy Classic.

So far since losing Notre Dame, Michigan has added home-and-home series with Arkansas, Virginia Tech and UCLA; seemingly improving their matchup each year.  With the Big Ten schedule moving to nine games, and Michigan filling one big non-conference game per year until 2023, my guess is Notre Dame won’t be coming here again until at least 2025 and probably closer to 2030.

Penn State’s student newspaper, The Daily Collegian, did everyone a great service sharing this PDF because it’s pretty awesome to look through.  On a different note, Ohio State’s schedule in 2016 is no joke and they have done a good job scheduling some big time non-conference opponents, clearly preparing for the college football playoff by improving their strength of schedule.  This is obviously what Michigan is going to try to do too, especially with the playoff starting next fall.

UPDATE: Michigan has started to confirm some more of the games that were in the leaked document on MGoBlue.com. 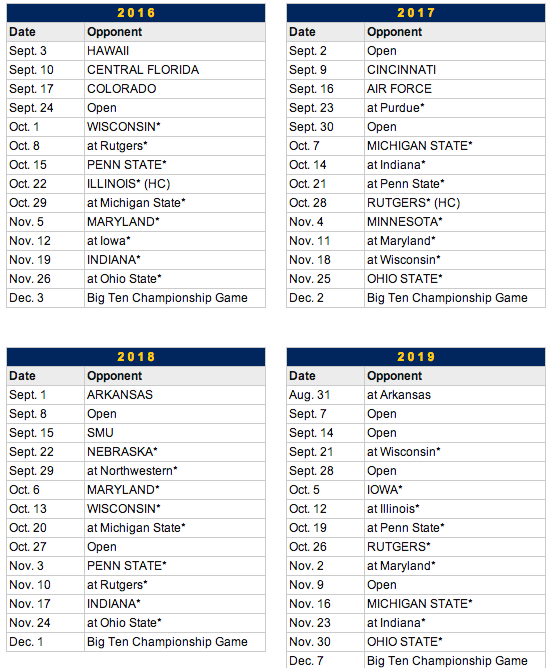 After Michigan’s announcement, the 2016 schedule on MGoBlue.com is the exact schedule that was in the leaked PDF that is saved on my computer. 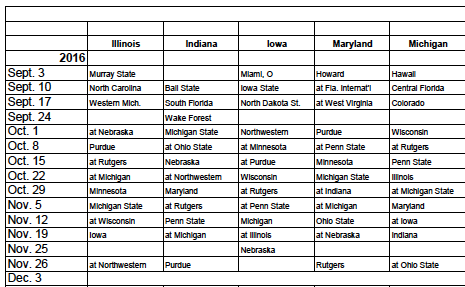 So when is Florida-Michigan getting announced?

I don’t have time this week to analyze the Michigan-Penn State game any further and quite frankly don’t want to.  It comes down to the offensive line not being very good paired with some horrible play calling.  During some discussions with some people, questions have been raised about the strength and conditioning coach as well as the offensive line coach, and it is possible they are an issue.  Guys should be stronger and playing better, but there is also a serious issue with depth on this team when you have 52 of 85 scholarship players in their first two years of NCAA eligibility.  Hoke won’t fire any of his guys and I’m trying to just remind myself that this team is 5-1 and they can still win the Big Ten Championship.  Brady Hoke also said on his radio show on Tuesday that they will be sticking with the power-run and the unbalanced offensive line.  Hopefully they run more of the offense they ran last season, a healthy balance of both and no unbalanced offensive line.  The unbalanced offensive line is a brutal gimmick and it only worked against Minnesota because they weren’t prepared to defend it when Michigan hadn’t run it before.  Al Borges doesn’t seem to see anything wrong with his play calling and this should concern you.  If you want some breakdowns on how truly terrible the play calling and execution was, just go over to MGoBlog.  One of my friends showed me this and it made me sick.