Posted on February 7, 2013 by Jeff Weintraub

Easily the most uneventful National Signing Day I have ever seen.  Each of the 21 signees had turned in their Letters of Intent by 11:42 am on Wednesday, and they already have six early enrollees, giving them a total of 27 incoming freshmen.  Michigan had nothing to do but make sure their fax machine was working and send out offers for their 2014 class, which they did.  This class for 2013 is a well-balanced class personnel wise.  They got players at every single position, and it will absolutely be an impactful class down the road.  It is very highly ranked as well, and deservedly so. (Below: ESPN, Scout, Rivals Rankings respectively). 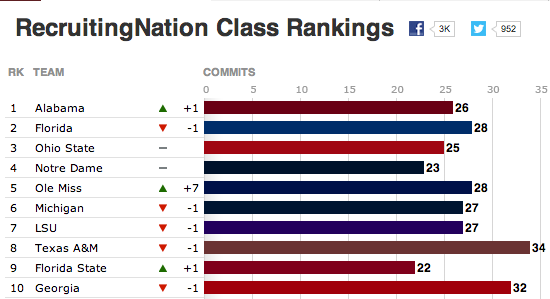 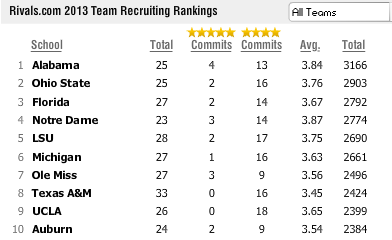 This is the first time in 25 years that Michigan did not have a single recruit from Texas, California or Florida, but that shouldn’t take anything away from this class.  There is just more talent in the midwest than there has been in years gone by.  Here is a look of the map of where the players are from.

The class is massive, but I guess that’s what happens when you have a lack of depth and you have serious attrition.  The player rankings and team ranking obviously differ from each recruiting service, but the general consensus is that Michigan has a Top 6 class in the country.  Here’s a nice breakdown of the commits and their star rankings for each of the services from mgoblog:

The big name you already know by now is runningback Derrick Green.  Green is ranked as the best runningback in the country by most of the recruiting services and will not redshirt.  They have a need in the backfield, and he is the type of power runningback that they want for their pro style offense.  Green has excellent vision; he finds the hole quickly and he explodes through it.  He run’s North-South and does not dance in the backfield.  He’s not a track star like Denard or Dennis Norfleet, but he has no problem trying to run over you.  He’s 6’0 220 but he can move, and proved it during the Army All-American game when he rushed for 49 yards on limited carries against the best High School Seniors in the country.  He will absolutely get carries next year, and I’ve been thinking he will get 30-40% of the carries on offense; provided Fitzgerald Toussaint is healthy enough to carry the ball the majority of the time.  In my mind, Green was the absolutely most important piece of this class.

Following closely based on the importance are QB Shane Morris, TE Jake Butt and then any of the offensive lineman.

Morris has already showen what he can do leadership wise.  He helped recruit most of this class, and clearly loves the school.  Morris’ development took a setback this fall though when he got mono, and he didn’t have a great performance in the Under Armour All-American game.  It will be imperative that Morris redshirt this year, he needs another full season of practice to get his development back on track.  He showed he is athletic and has a cannon for an arm, but his accuracy has been erratic.  This is something that can be fixed with more practice.  He knows where the open receiver is, and has great vision on the field, he just needs a little more fine-tuning and practice to replace the 5 or so games and weeks of practice he missed this year.  Morris adds depth to the quarterback position, which has been seriously lacking.  When Gardner is gone, Morris will take over the starting job, and Russell Bellamy will keep his spot riding the pine pony.

Tight end Jake Butt was another important get for this class.  They are lacking with depth at tight end, and Butt will likely play right away.  Devin Funchess and A.J. Williams did a great job last year, with Williams being used mostly for blocking.  Funchess obviously busted onto the scene and proved to be a great receiving option, and was a First Team Freshman All-American.  Butt played in the Army All-American game and was the 5th rated tight end in the country.  He’s 6’6″ 235 and will be a good option in the passing game.  He does a good job of finding soft spots in zone coverage and is athletic enough to beat man coverage.  Blocking-wise, he was good in high school, but it will be interesting to see how it translates in college.  He enrolled early, so he will be familiar with the playbook come fall, and will likely be a contributor next year.

Khalid Hill is the other tight end in this class and he will probably redshirt.  He has potential, but I see him more as a blocking tight end.  He’s roughly 6’2″ 235, so he doesn’t have elite size for a pass-catching tight end.  With Williams, Funchess and Butt ahead of him, the coaching staff will take their time and let him develop, especially because Funchess and Williams didn’t redshirt, and Butt likely won’t either.

The other runningbacks in this class are Deveon Smith, who is arguably the best runningback in the state of Ohio, and Wyatt Shallman, a product of Catholic Central.  Smith, like Green, doesn’t have elite speed, but he is great at breaking arm tackles and is another downhill runner.  He can be elusive, but he’s another runningback that will fit the  power run game that the coaches are trying to instill.  Shallman, meanwhile, is going to be a fullback-tight end hybrid, and H-back if you will.  Brady Hoke compared him to Aaron Shea and said that is the type of role he will have, which is funny because my cousin said the same thing to me about a month ago.  Shallman is a good blocker, and will be a short yardage back in the future.  Both of these runningbacks are going to redshirt, and will establish depth in the backfield.

The wide receiver class is easily the most interesting group that Michigan brought in this year.  Jaron Dukes, Csont’e York and Da’Mario Jones are all at least 6’2″ and are very athletic; all three of them are also going to redshirt.  They’re the type of guys where they aren’t ready to play right away, but they have the potential to be great.  Michigan took guys that will need coaching, but have the size and speed combination that cannot be taught.  Dukes won’t be a burner, but that doesn’t make him any less effective.  When he went against Ohio State four-star commit, and 6th best corner in the country, Cameron Burrows this season, he absolutely torched him for six catches, 173 yards, and two touchdowns.  Dukes, York and Jones all have the ability to go up and get the football, and they all do a good job of getting separation off the line of scrimmage.  None of them are going to do a lot with the ball after they catch it, and Jones has had some inconsistent hands.  That being said, this can all be fixed with coaching; you can’t teach a kid to be 6’2″-6’3″ while running a 4.6-4.7 40 yard dash as an 18 year old.  Sure this class didn’t get the elite five-star receiver like Laquon Treadwell that could play right away, but I’m excited to see what these kids can do after they redshirt next year.

The offensive lineman is a great group, easily the best offensive line haul in the entire country, and the most talented group of recruits for Michigan.  There were seven of them including the long snapper Scott Sypniewski, and they will all be very crucial in the development of this program down the line.  Excluding Sypniewski and Dan Samuelson, all of the offensive lineman were consensus four-star recruits and they each made All-American games.  Now, all six of them will redshirt, especially because all four offensive lineman from the 2012 class redshirted last year.  Don’t worry about them getting on the field early, early as in next year, because it simply won’t happen and it shouldn’t.  The cupboard was pretty bare at offensive line and so it has been imperative for the coaching staff to get players in and to begin building a formidable front line, especially if they wan’t to utilize the power run game.

Patrick Kugler and Kyle Bosch are the highest rated lineman in this class, and they will be absolutely fantastic.  Both of them are very big and do very well opening holes and move well.  David Dawson is an absolute road grader, and it was huge getting him back in the class after he decommitted.  Samuelson will be another road grader, like Dawson, but to be perfectly honest, I don’t see him playing much until later in his career.  Obviously, things can change, there are just a lot of good interior offensive lineman ahead of him and he isn’t as refined as Kugler or Dawson.  Both tackle commits, Logan Tuley-Tillman and Chris Fox are massive and won’t see the field for a while, which will help them with their development. Short of turning this post into a short novel, there’s not enough to say about this group other than it is exactly what Michigan needed and they will be huge contributors going forward.

This offensive class has a ton of potential, with some players that will contribute right away.  Derrick Green, in particular, and Jake Butt, will contribute next year, while the rest of the class redshirts.  It will help restore the depth on offense that Michigan has desperately needed and they all fit the pro-style offense that Michigan is going to transition to with the departure of Denard Robinson.