Posted on February 7, 2013 by Jeff Weintraub

Michigan’s 2013 recruiting class is full of players on the defensive side of the ball with potential that will be able to contribute down the road.  Just like last year, and the offensive side of the ball, their development will be absolutely crucial for the program.  It’s pretty awesome how much talent Hoke was able to assemble, with the help of his assistant coaches obviously, for this class on both sides of the ball.

Another chart from mgoblog:

(Ross Douglas, Taco Charlton and Dymonte Thomas are the early enrollees on the defensive side of the ball.)

Dymonte Thomas was a huge pickup for this class, and he was another Army All-American game participant.  He committed early and he enrolled early and it will be tough to keep him off the field.  He’s got all of the tools, and Michigan has a serious lack of depth at the safety position, particularly at strong safety.  Dymonte played runningback in high school too, but there is a 0% chance of him getting any carries there.  He’s fast and he can lay the wood on people.  With Jordan Kovacs departing, and Dymonte enrolling early, he’ll be in the mix for early playing time.

Defensive tackle Henry Poggi is Michigan’s highest rated recruit other than Green and Thomas, and there was some concern that he was going to decommit and go to Alabama, but thankfully that didn’t happen.  Poggi, who played in the Under Armour All-American game, is a big boy that is going to put on some more weight; the kid is 6’4″, 260.  He lined up mostly at the three technique, and I would imagine he would stay there on the defensive line, while Ondre Pipkins plays the nose.  I don’t think Poggi will end up redshirting, but it will likely depend on whether the coaches feel comfortable or not with their depth.  I’m leaning towards him not redshirting, simply because of how talented of a player he is.  He’s quick off the ball, he’s good with his hands and he wraps up the ball carrier very well.

Maurice Hurst Jr. is the other defensive tackle in this class, and he is very athletic, especially considering he is listed as 6’2″ 305.  He’s so athletic that his high school football team gave him carries at fullback.  He’s quick off the ball and is very good with leverage and will not get pancaked.  I see him more as a nose tackle on Michigan’s defense, and he will be good at wreaking havoc in the backfield.  Hurst, like most of the defensive side of the ball, should redshirt.

The lone defensive end commit, Taco Charlton, is one of the more athletic players Michigan got on the defensive side of the ball.  He is good at shedding blocks, and has good edge-rushing speed, but will need to work on playing lower and getting better leverage.  He’s also mainly a pass rusher right now and will have to get better at defending against the run.  He’s 6’6″ 240 and will need to put on some weight before getting on the field, which he will have time to do with a redshirt.  Although it wouldn’t complete shock me if his athletic ability got him on the field next year, I wouldn’t plan on seeing him.

The linebackers Ben Gedeon and Mike McCray (Under Armour All-American) are insanely athletic.  You could make an argument that this is the best position group of Michigan’s defensive haul, but we’ll have to see what happens a few years from now.  Gedeon is listed as 6’3″ 215 and will need to put on weight before getting on the field, while McCray is listed as 6’4″ 230.  Both of these players, despite their elite athleticism, will redshirt.  This isn’t because they aren’t ready to contribute right away, but rather because there are a lot of young players ahead of them from last year.  Last year Michigan added 4 four-star linebackers, and only Kaleb Ringer redshirted because of injury.  Both Gedeon and McCray are good in coverage and have showed good instincts, but Gedeon will have to work on his run defense.

The secondary commits, after Dymonte Thomas, is where things get interesting.  At corner, you have Jourdan Lewis, Ross Douglas, Reon Dawson and Channing Stribling.  Lewis is extremely athletic and shows good ball skills on film, but he has struggled a bit in man coverage.  He played in the Army All-American game, so he definitely has the skills to be an elite player.  Douglas is good at jamming the receiver at the line of scrimmage and is good in man coverage, but he doesn’t have elite speed and struggled sometimes with taller receivers.  Dawson has been reported to be an elite athlete, but a project.  Like the wide receivers Michigan took, he has pure athleticism and the coaching staff is going to try to coach him up.  He is good in zone coverage but will need to work on his man to man coverage.  He’s tall (6’2″) and is a good tackler, but he will need a year to redshirt and get better.  Like Dawson, Stribling is 6’2″ and very athletic.  He’s quick, with good ball skills and is pretty good in coverage.  He’s also a project, though not as much as Dawson, that will need a year to develop and put on some weight.  Stribling is also destined for a redshirt, which I think they will try to do with all four of their cornerback commits.  Bottomline with Dawson and Stribling, you can’t teach the athleticism that they have at 6’2.”  They could be scary to go up against in the future if their development comes along like it should.

At safety, Michigan added Delano Hill to go with Dymonte Thomas, and Hill should also be redshirting.  He’s got pretty good size at 6′ 200 lbs, and is a good tackler in space.  He’s good in coverage with tight ends, but doesn’t quite have the skills to stick with faster slot receivers.  He’s an aggressive safety, and will be nice to pair with Dymonte in the defensive backfield down the road. 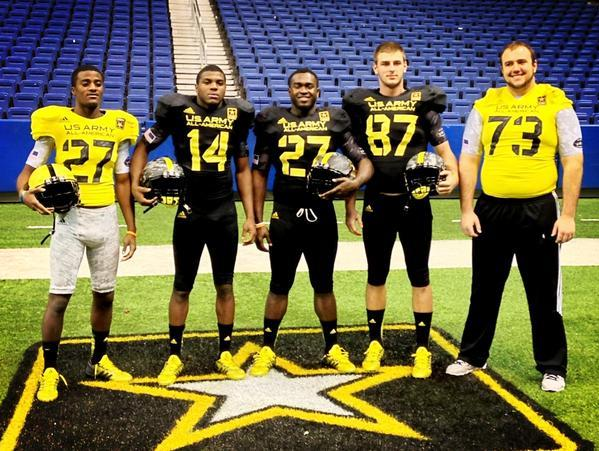 Keep in mind that when I say that they plan on a player redshirting, it’s just my opinion.  I don’t know what the coaching staff is going to do, especially because Hoke is so tight-lipped.  I think that Thomas and Poggi are the only two that won’t redshirt on the defensive side of the ball, but if someone proves in training camp that they are too good to keep off the field, then they will play.  Especially with injuries, anything could happen.  It’s even possible that they use a guy like Hill, who is a very good tackler, on special teams next year, just so they don’t have use defensive starters on special teams.  Charlton is another kid to keep your eye on, because his pure athleticism could get him on the field early.

A few interesting notes from mgoblue.com:

Michigan will now have 52 of 85 scholarship players in the first two years of their NCAA eligibility.  Next year they will probably only take 16 players, and they already have two commitments, linebacker Michael Ferns and quarterback Wilton Speight.  On Signing Day last year, the coaching staff already had two commitments for 2013, so getting ahead start on the class is something they love to do.  Hoke said in his press conference that they will look at around 1500 players for 2014 and their 16 spots.  He also didn’t have an update on Devin Gardner and his medical redshirt.  Hopefully he will get it, so then that way Shane Morris doesn’t have to start in 2014, and he can have two full years to learn and get acclimated.

This was a very important class for Michigan, and it went very well.  Short of adding Leon McQuay III or Laquon Treadwell, I don’t see how this class could have gone any better.  They got players at every position that have serious potential, and they have about four guys (Green, Butt, Thomas, and Poggi) that will likely contribute early on next year, and guys like Hill and Charlton, that could contribute if necessary.  Hopefully they will have the luxury of being able to redshirt most of this class to add some depth back into the program.