Posted on December 1, 2012 by Jeff Weintraub

After a long absence, Jon makes his way back onto the podium with this absurd ballot.  Oregon at #2 ahead of Alabama and Georgia doesn’t make sense.  South Carolina and LSU ahead of Georgia doesn’t make any sense either; along with Texas A&M being ranked #11.  His ballot has an absolutely horrific order for the Top 11.  The middle part of his poll is decent, but Utah State, Northern Illinois, San Jose State are all overrated, easily.  And as much as I want to keep defending USC you can’t have them ranked after that loss to Notre Dame.  That game was a massive coaching brain fart, and just all around terrible.

Ratto dialed back his ridiculousness a tiny bit this week.  Ranking Notre Dame and Ohio State 1, 2 continues to show his lack of ability to think for himself.  He literally just ranks everyone based on record.  That’s the only way to explain Kent State and Northern Illinois.  I mean seriously?  Those teams suck, I can’t even sugarcoat it.

Kent State’s only loss up until last night was to a Kentucky team that went 2-10, didn’t win a single game in the SEC, and they lost by 33 points.  That cannot be emphasized enough.  A team that was going to get a BCS bid if they won, lost to an absolute dumpster fire 2-10 Kentucky football team.  Absolutely garbage.  Even Boise State at #16 is getting a little over the top.  I thought I was being a bit absurd when I put them #19 in my poll.

Then he throws in Clemson at #17?  Clemson would rock any of these teams any time and place.  All of the teams behind them would embarrass them except for Utah State, San Jose State and Rutgers.  By the way good job Jim Delany, you let a team that lost to Kent State into the Big Ten. Moron. 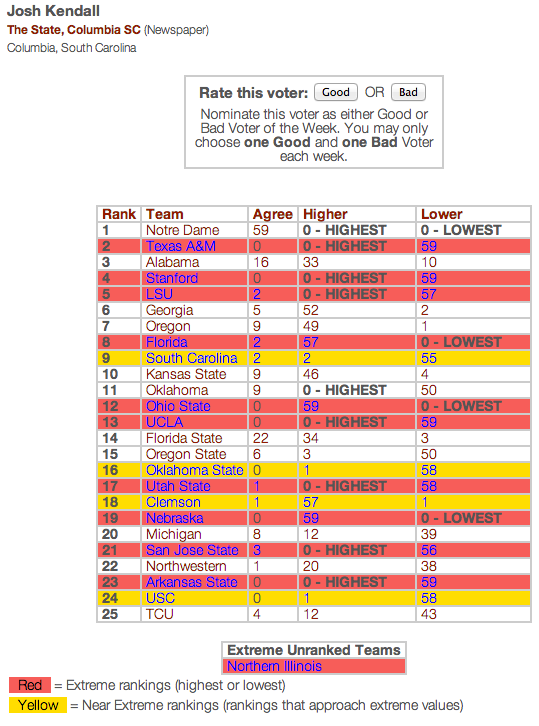 Christ, this guy really wanted the Gold Medal this week.  I mean, he went way out of his way to get this bad boy.  Good god, this poll is a complete and utter disaster.

Texas A&M #2, Stanford #4, Florida #8, Ohio State #12, UCLA #13, Oklahoma State #16, Utah State #17, Clemson #18, San Jose State #21, Arkansas State #23.  10 of 25 teams are horribly ranked.  Was Josh drunk when creating this poll?  Or had he recently suffered a closed head injury while doing a remedial task, perhaps when he was putting up a Christmas tree?  This guy strikes me as the person who could hurt himself doing something embarrassingly simple.  Whichever it was, I’m not sure, but he should get his act together ASAP.  I can’t even dive into each ranking in depth because it would take far longer than I care to discuss it.

I mean honestly, what football games was this guy watching last week and this whole season?  Someone remove this guy from his voting duties now.

And now for your amusement, my poll.