How Do You Get To Be A Voter For The AP Poll?

Seriously, at this point it is a mystery to me.  This week we have our two favorite AP voters at it again, with an epic tie for worst poll of the week.  They’re both so bad that I had to share them both. 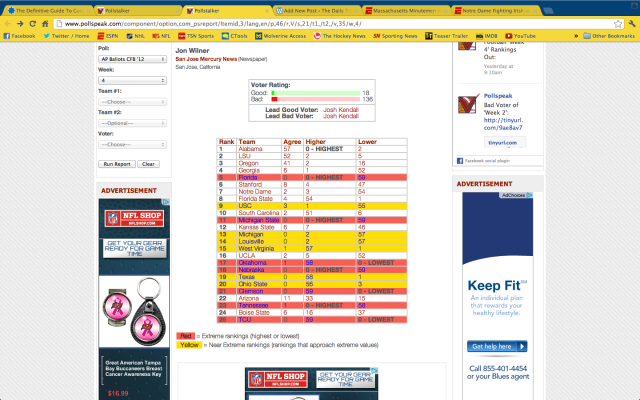 These guys are going to have a “who’s the bigger dumbass” contest for the entire year.  Which brings me to my biggest question, how do you get to be a voter for the AP Poll?  Do you just have to volunteer and write for some newspaper somewhere in the country?  Because prior football knowledge is clearly not a prerequisite.  How can someone so uninformed be a part of determining the football rankings?  How can your poll be so drastically different from the average AP Poll voter?  Are you intentionally trying to be different or are you just that stupid?  I’m seriously at a loss at this point; it’s beyond frustrating.

In other less frustrating news, in case you were wondering why Shane Morris was having such horrific stats for a five-star quarterback the past couple weeks, it’s because he was diagnosed with Mono.  His coach says he’ll be back in 10 days, but we’ll see what happens.

1 Response to How Do You Get To Be A Voter For The AP Poll?