Looking back at last year’s draft it’s pretty easy to see that Detroit Lions GM Bob Quinn did an exceptional job in his first NFL Draft. With the exception of Jimmy Landes, the long-snapper who went on IR, and Jake Rudock, every Draft pick that the Lions made in 2016 played for the Lions. If the Lions can have a draft with similar impact this year, the roster can be improved dramatically in Quinn’s first two years at the helm.

As far as this year’s draft, it’s almost easier for me to say what the Lions will not or shouldn’t do, rather than what they will do. I will guarantee that the Lions will not draft an offensive lineman, quarterback, long snapper, kicker or punter in the first round. But other than that, every position is literally in play (but hopefully not TE or RB). They made a huge splash in free agency signing Rick Wagner and T.J. Lang and have solidified the offensive line. Quite frankly, I think the Lions now have one of the best lines in the NFL. But, there are still plenty of other needs to be addressed. 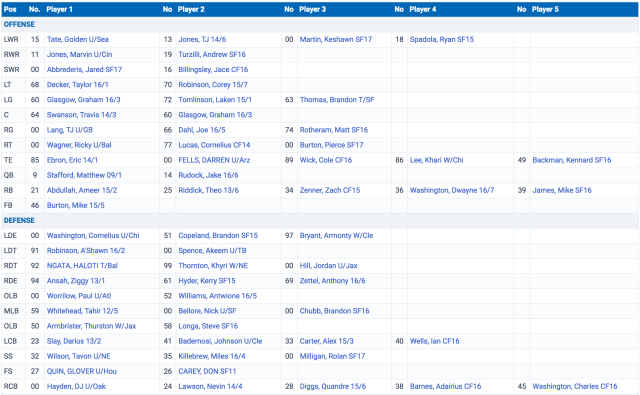 Now if you look at the depth chart, there are some needs that jump to mind immediately.

First off, they are in desperate need of another pass rusher to pair with Ziggy Ansah. Devin Taylor showed he couldn’t do that last year and I’m not sure that Cornelius Washington is close to good enough to give them the boost that they need. Kerry Hyder was a nice surprise, and he’s a great guy to go in and spell Ansah, but he does not play the closed end (LE) position.

Second off, they are beyond thin at linebacker. Outside of Tahir Whitehead, I don’t think they have another linebacker on the roster that they could start (unless they move Miles Killebrew permanently). The Lions like Antwione Williams, but I’m not sure he’s ready to start. They cut DeAndre Levy and last year linebacker was a revolving door of blah. They need to get some playmakers in that front seven.

Every time Quinn has talked pre draft he mentions the #Lions base D is nickel. They love Williams at LB. I don't think LB goes at No. 21.

They’ve brought in some defensive tackles to go with A’Shawn Robinson and Haloti Ngata, but they still need another defensive tackle. Haloti Ngata is not getting any younger and Robinson was a bit of a work in progress last year. They are in dire need of improving their pass rush after last year. Adding a three-tech that can get after the quarterback.

They signed D.J. Hayden and Darren Fells, but they still need another cornerback and tight end on the roster. Quandre Diggs and Nevin Lawson have some use, but they still need a #2 corner. I’m not sold on Hayden starting in the #2 spot and Diggs and Lawson struggled there last year. Eric Ebron and Fells are an intriguing pair of tight ends but they need another. Fells is strictly a blocking tight end and while Ebron has improved since entering the league, they need to add depth to that position.

Only fixtures in Lions secondary past 2018 are Slay and Killebrew. Deep class of DBs. Don't be surprised if BQ goes out and gets more picks. pic.twitter.com/Z16AaffojP

Another need that jumps out to me right away is third wide receiver. This somewhat goes hand-in-hand with tight end to the extent that if they draft a tight end early, they could move Ebron to the slot full-time. Anquan Boldin was a nice addition last year but it’s time to add a younger third WR to the mix that can play. The last need that they need to address, but not as important as the defensive needs is running back. I like the four guys that they have on the roster, but Ameer Abdullah cannot stay healthy. They need playmakers on the offensive side of the ball. Badly.

So to recap…DE, LB, DT, CB, TE, WR and RB are their needs. That’s not really in order, but it sort of worked out that way. If it was not apparent to you before, it should be now…the Lions are very thin on defense.

In terms of draft picks, here is what the Lions are working with:

Depending on how the Draft shakes out, I would not be surprised to see Quinn trade down to acquire more picks. It’s an extremely deep draft and I would love for the Lions to make 10-11 picks.

To give you and idea of who the Lions have met with during this pre-draft process, this tracker from Walter Football is very helpful. 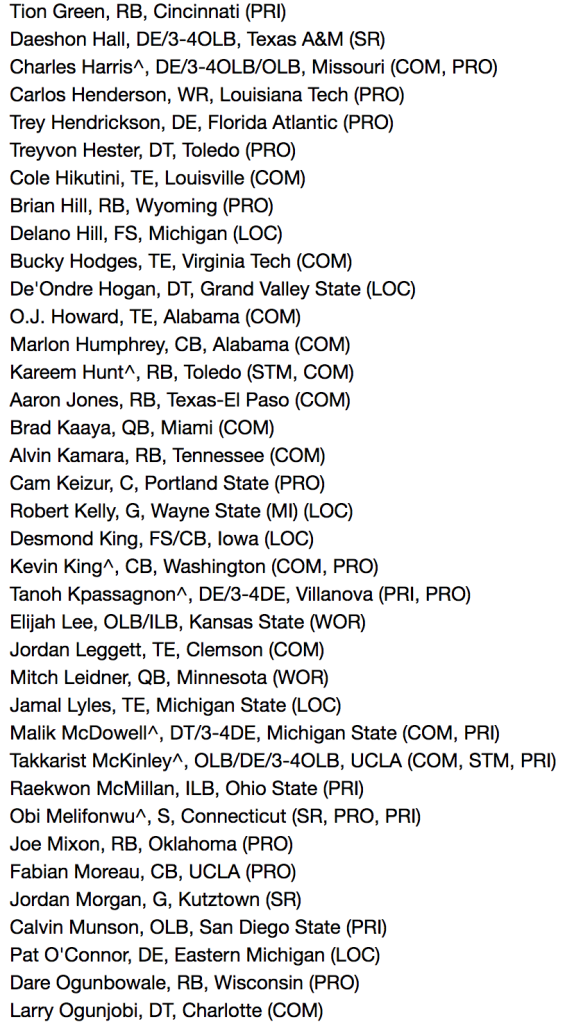 According to the 2016 Walter Football Pre-Draft meeting tracker, the Lions met with 6/10 of their draft picks prior to selecting them. I would be willing to bet that at least 50% of the Lions picks they end up with are on this list.

Now it is time for the fun part. You know the needs, so I’m going to go through and do my ideal seven-round draft (with alternates in italics) for each pick.

There is a 0% chance that Reddick is there when the Lions pick, but I had to put him on here because this is my ideal draft. He’s this year’s Sheldon Rankins. The perfect fit for the Lions that had his stock go through the roof before the Draft and will not last. Also, the only way I’m okay with the Lions drafting a tight end in the first round is if O.J. Howard somehow plummets (which won’t happen).

This draft is deep. One of the deepest I can ever remember at positions that the Lions need to address. It’s so deep that there are a number of players the Lions could take in the first round that would make me happy, which is not usually the case. What I can tell you is that if the Lions draft David Njoku, Charles Harris, Malik McDowell, John Ross or a running back not named Christian McCaffrey in the first round, I’m going to be upset. Like meltdown, breaking hockey sticks over my desk upset. Njoku is a more athletic Ebron, Charles Harris is an unathletic DE, McDowell is talented but has motor issues (Nick Fairley 2.0), John Ross is a speedy but fragile WR, and the Lions have too many needs to address RB that early. Frankly, it’s easier to list the guys that I do not like/want in the first round instead of listing all the guys that I do like. If they end up with someone other than these five in the first round, there’s a strong chance that I’m going to be pretty happy with the Lions first round pick. Don’t make me mad, Bob.

The Lions will probably take a quarterback at some point because it’s something that Bob Quinn likes to do, so while I did not mock for it, I would expect it if I were you. You also may have noticed that I never mentioned Jabrill Peppers here. Here’s the deal…I love Jabrill. I think he’s going to be a very good NFL player. I do not want Jabrill Peppers on the Lions. Why is that, you ask? I do not want to have to deal with a certain portion of the fan base that will root against him incessantly and hope that he fails just because he played for Michigan. It would be a toxic atmosphere for him and people are so dumb that they’ll never change their opinions of him, for whatever reason. I’m the type of person that once you turn pro, where you went to college does not matter. I love having Decker on the Lions and think he’s a great player. I would love to have Gareon Conley on the Lions this year…it does not matter to me as long as they are a player that can help the Lions get better. But for some reason some adults cannot seem to grasp that concept and the idea that someone would cheer for a Lions player to fail because he went to Michigan is aggravating. Now, there are some that do not want him because they do not think he’s a first round pick. That’s fine, everyone is entitled to their own opinion. If you do not think the value is there, that’s at least a reasonable reason to not want him.

At any rate, the Lions have a fair amount of needs. The ideal draft for me would be to address the defense with the first two or three picks and then look at a wide receiver or a tight end. As I said, Bob Quinn hit a home run with his first draft and it is time to do it again. There is absolutely no reason to think that the Lions will not have a great draft and that they will not address their needs. I’m excited for the future and you should be too. They even did a really good job with their jerseys (thank god).