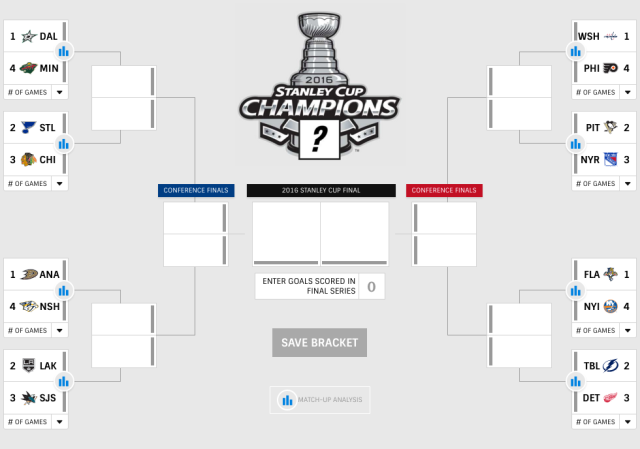 For my money, the Western Conference is far more clear cut than the east. Almost every playoff series in the east could be decided by a coin toss. The West is far more top heavy.

The Stars have not had Tyler Seguin the past few weeks but that has not slowed them down. They took first overall in the entire Western Conference and Seguin is going to be ready for game one. John Klingberg is an extremely key piece on their blue line and his 58 points this year were crucial. The only question for the Stars is whether Lehtonen or Niemi will take control of the job. So far they have been alternating and it will be interesting to see if that continues. Meanwhile the Wild are going to be without Zach Parise and Thomas Vanek to start the playoffs and I don’t think they are deep enough to keep up with Dallas. Stars in 5

Will the Blues finally get past the Hawks? Part of me wants to say yes because the Blackhawks have to get tired eventually from all of these long playoff runs (right?)…but so far no such luck. The Hawks have an absolutely dynamic duo in Patrick Kane-Artemi Panarin and while the Blues have a decent d core, I don’t think there is enough to slow down the depth of the Hawks (even if Hossa is out for a bit). So long as Crawford manages to stay healthy, the Hawks will be poised for another deep run. The only reason why they didn’t win the West is he got hurt. The Blues will need Jake Allen or Brian Elliott to step up and steal some games if they want to make a move…they don’t have the goal scoring to keep up with the Hawks.  Hawks in 6

This series would be absolutely epic and I really hope it happens. Two of the deepest teams in the West and both of them can score goals. I think in the end though, that the Stars defense and goaltending will eventually let them down. Teams that rely on goalie tandems rarely make deep runs and though Niemi has been there before, he had a much better blue line when he did it. I think eventually the flood gates will break and Kane, Toews, Panarin, etc, would end up having their way with the Stars defense. The Hawks blue line is just too deep and it would be the major difference.  Hawks in 7

The Predators have been solid this year but Pekka Rinne has not been the same. The Ducks have a great young blue line and even though Ryan Getzlaf and Corey Perry had down years, they have as deep of a group of forwards as ever. The Predators, meanwhile, are dying for consistent goal scoring and even though they have an elite blue line, they have struggled to keep pucks out of the back of their net this year. These teams are very similar (top heavy talent F’s, elite and young D) but the Ducks will shine through.  Ducks in 7 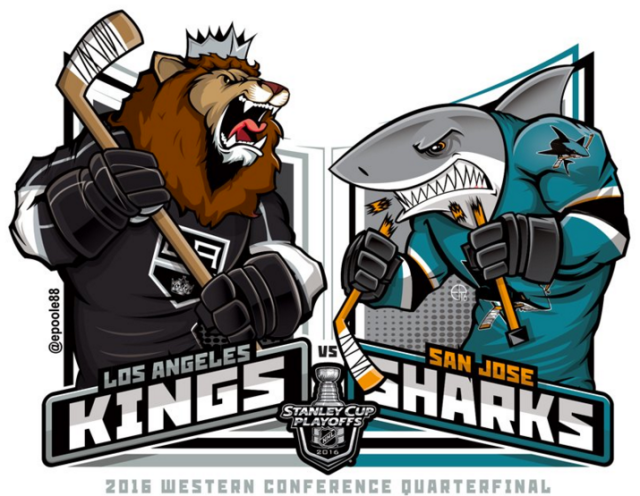 The poor Sharks…tons of talent and keep running into the Kings. The Kings are still loaded and until the Sharks can prove they can win in the Playoffs, I won’t be jumping on this bandwagon. Both teams can score at a hearty clip, but the Kings have the better D core and the more experience goaltending. Joe Thornton and Joe Pavelski had some absurdly productive seasons, but come playoff time, I’m not sure that it will be enough to get past Quick. Even more of an issue in my mind is the inexperience in the Sharks net. Martin Jones has been great this year, but being “the guy” in the Playoffs is a whole new animal. Kings in 6

The Ducks started slow and finished strong, somehow getting the first spot. The Kings have been doing well all year and their consistency will be the difference. The Kings have a deeper group up front and the experience in net will also play a major factor. It’s so tough to pick against Jonathan Quick because he is such an elite goaltender. Then you add in the depth on the Kings blue line and up front and what isn’t to like? The Ducks may rank first in defense, but only 17th in offense and that is going to be a major problem for them. Kings in 6

For my money, when they are totally healthy, these are the two best teams in the league. They match up well and it would be an incredible series. I went back and forth between these two quite often and I’m still not quite satisfied with my choice. Both are extremely deep on offense with guys on the 2nd and 3rd lines that can contribute quite often. The Blackhawks have the advantage on the blue line, while the Kings have the advantage in net. Overall, I give the nod in talent to the Blackhawks, and unless Quick stands on his head, the Hawks would pull through here. The amount of production they have on offense would be too much for the Kings defense to handle..2.85 goals per game is just incredible.  Hawks in 7

This was a tough call and I’m going a little bit away from what my initial thoughts were. You may have noticed but in my mind, the Blackhawks, Kings, Capitals, Pens and Stars are the 5 best teams in the NHL right now. I value teams that can score goals and have depth on the blue line. Elite goaltending is always a huge plus, but I’ll take an elite defensive unit with a strong goalie over an elite goalie with an above average d core. The Blackhawks have supreme depth on both offense and defense but I think this becomes a case of them running out of gas. Too many Stanley Cup runs wearing this team down and too many long series against difficult opponents on the way there. The Penguins, with a healthy Malkin, have the ability to match the scoring output of the Blackhawks and matchup well against them in terms of personnel and playing style. If Marc-Andre Fleury stays healthy and can outduel Crawford in net, the Pens could take this one. Sidney Crosby has been unbelievable the second half of the year and this team is hitting their stride.  Pens in 7