Thank You Calvin, and All Hail Megatron

I tried and failed to write this post many different times over the past couple days. It’s tough to write these types of posts for me because I want them to be perfect and I keep thinking of different memories or moments that were awesome as I go along. Thinking of different moments that will never be repeated, duplicated, replicated, you get the idea. It’s a shame that Calvin Johnson is done at such a young age, but his body is not what it once was and you could see in 2014 that he was dealing with more and it was taking longer for him to come back from getting banged up.

Seeing this tweet was absolutely devastating. Part of me still cannot believe that Calvin Johnson is retired. I just do not quite want to believe it yet…even if the news broke on January 31st that he was contemplating retirement. A player that I idolized so much calling it a career early is very tough to swallow. Watching highlight videos, listening to different clips of him mic’d up and looking at different photos does not help matters either. I still remember the first time that I saw Calvin Johnson do something that made my jaw drop. November 6th, 2004 against NC State…yeah, I had to look up the official date, but you cannot ever unsee this catch.

That’s when I started following Calvin Johnson’s career. And let me tell you, that was not the last ridiculous catch that Calvin had in college.

When he entered the Draft, I was hoping the Lions would take him. My thinking was screw it, what is the worst that could happen by adding another offensive weapon? It may not be true, but the story that Calvin borrowed someone else’s shoes to run in the 40 at the NFL Combine is still one of my favorites. That he is so ridiculous from a physical stand point that something like that could have been true was just awesome.

Those highlights are just a display of God-given natural ability that cannot be taught in any way shape or form. Calvin was just made differently than normal people. There’s no denying it. The only person that I think can even be considered as much of a physical freak as him is Bo Jackson. I actually got into a twitter argument with an NFL insider that was convinced Randy Moss was more of an athletic freak than Calvin which is lol funny. If you think Randy Moss or Jerry Rice were better receivers than Calvin, that’s one thing, but more freaky athletically? Not a freaking chance.

Term "Freak" is overused but it is the best word to describe Calvin Johnson. His combo of size, speed & agility = freaky. One of a kind.

Megatron = a weapon of Madden destruction

I was so happy once the Lions chose him; thank god for Al Davis. Lane Kiffin wanted Calvin Johnson over JaMarcus Russell but good ol’ Al did what he wanted and I love him for it. And thank god Mel Kiper was not running the Lions draft in 2007 either. Brady Quinn? Yuck.

It was so amazing to watch how fast he evolved and how quickly his dominance started to take shape. How quickly defenses had to game plan for him and how he forced them to know where he was at all times and it still would not matter. He was one of those players that could be held in check all game, or most of it, and then wreck your day with some unbelievable catch. He never mailed it in and always kept opponents on their toes.

I wish I could remember the first time I saw him on the field, but alas, my memory is not that good anymore. I do remember the first preseason game that I went to his rookie season and the first thing I did when I got to Ford Field was going into the Roar ‘N More store and got a black Calvin Johnson Lions jersey. My dad asked if I was sure or if I would rather have a Roy Williams one instead…but I knew what my heart was set on.

Half human, half created player.

Never forget players looking in amazement at how ridiculous Calvin Johnson was for WR at his first Pro Bowl, looked like a rush end

There are only 10 highlights on here and it could have very easily been more than that and you could very easily debate each one at the start of the list. I do know that the touchdown against the Bengals that is #1 is one of the most awesome things I’ve seen at a football game. Calvin, like Pavel Datsyuk, is a player that not only the fans were in awe of, but the other players as well.

HAHAHAHAHHAHAHAHAH TRIPLE COVERAGE SIT AND SPIN ON IT #MEGATRON

Sometimes it is even difficult to separate all of the incredible things he did game-by-game from each other. Everything he did for a while seemed to be more miraculous than the next. It was impossible to turn away because you never knew what kind of catch he was going to make next…which improbable feat he was going to accomplish and make it look easy. He could make a 10-yard gain look amazing by making some absurd catch he had no business making because before Stafford was throwing to him, or when Stafford was hurt, he had some train wreck quarterbacks throwing to him. Most other receivers would not have been able to produce or they would have put up some paltry numbers and their fan base would have flipped out. Not Calvin though. Not even the Madden Curse could bring him down, which he effectively destroyed. It makes sense that the curse started with Barry Sanders and it had to be another generational talent on the Lions to end it.

Calvin was pretty damn consistent throughout the entirety of his career. His prime was the three seasons from 2011-2013 and boy were they spectacular. Two of those three seasons were two of four TOTAL seasons that he played every single game in. And even though he never played fewer than 13 games in a season, I would be willing to bet that he played at least 15 games in his career not even close to 100%. If not more than that.

Calvin also had 12 catches end at the opponent's 1-yard line during his career, the most in the league since he entered in 2007.

It was particularly tough for me listening to people talk about how the Lions should cut or trade Calvin this past year. To try to free up cap room…cut the best player on your team…just think about that for a second. I don’t have to tell you which side I fall on during that debate. And then those same people were hoping that Calvin would retire to free up $11 Million in cap room. It always dumbfounded me that people wanted to get rid of one of the best players in the Lions franchise history so badly. People took him for granted and I really wish they hadn’t. People always seem to take things for granted, especially athletes they idolize.

Just as ridiculous is whether or not he is a Hall of Famer. I get he did not win anything and that his career was shorter than normal. But the idea that one of the biggest game-changing athletes would not be a Hall of Famer is ludicrous. You’re welcome to say that you do not think Calvin is a first ballot Hall of Famer because of the waiting line at wide receiver, but to think he is not a Hall of Famer at all? Get real.

Calvin Johnson's @NFL ranks since 2007. Not too shabby: pic.twitter.com/O38BMu8VyL

He holds 10 NFL Records…TEN! And that does not even include some of the bizarre stats that he holds. And even still, his numbers do not adequately display his impact on the game the past 9 seasons. He was so much more than just the numbers; the guy even has a rule named after him!

The Saints were so scared of Calvin Johnson that they lined up like he was a gunner on the goalline pic.twitter.com/PBSqBefmQr

Calvin Johnson's 11,619 receiving yards and 83 rec TD are most in NFL history by someone who never won a playoff game (via @EliasSports)

On top of all the ridiculous plays on the field, he was a class act off of the field. You never heard a bad word about him and his peers loved him. Everyone was in awe of his talent and that’s how you know someone is truly special. He was the type of player that would dominate, set records, quietly hug his dad and then go right back to work. People who insinuate that he was lazy or did not care or did not compete frustrate me. It is an insult to him as a person and a player.

How a kid from the heart of Georgia became one of the NFL's greatest receivers. Here's Calvin Johnson's story https://t.co/DER8E371On

His statement truly says everything that there is to say about him; he’s a first-rate person. 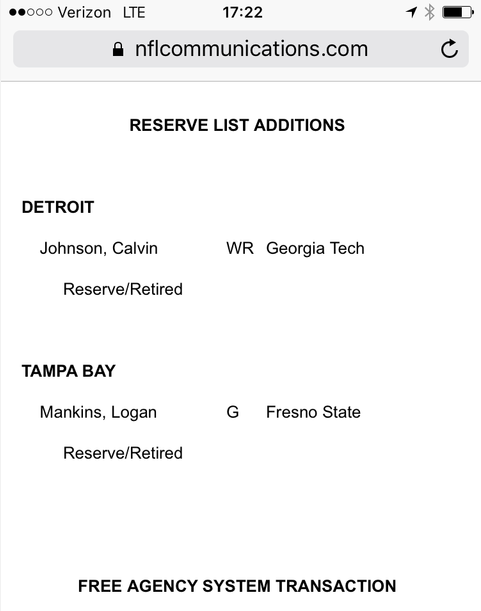 Thank you Calvin, and All Hail Megatron.

There were some good reads on his retirement that I thought were worth listing below here…I recommend taking a look.

[Photos via: The Detroit Lions]

1 Response to Thank You Calvin, and All Hail Megatron