Last, but certainly not least, we have the defensive backs group. This was an EXTREMELY disappointing day in terms of NFL Network coverage and was the least I remember seeing of the defensive backs group. They did not even show one of the traditional pass-catching game drills that NFL Network had finished their broadcast with every year. I guess I’m not sure why I expect the NFL Network to cover as much as possible when the Combine has grown into this huge thing that people love watching. They know now that they can show more commercials than ever and sucker people in and make more money without showing actual content. They show every 40-yard dash, but not every drill. Totally backwards, but whatever.

ANYWAYS, onto the players. This is an athletic group and probably one of the most athletic defensive back groups they’ve had in Indianapolis. In fact, on the broadcast they said that it was in the top 2 fastest Combine groups ever with a 4.50 40-yard dash. 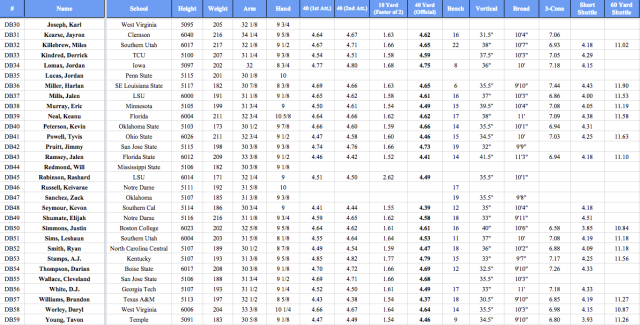 Mackensie Alexander, CB, Clemson: Alexander is thought of as the best cornerback in the Draft by many (second best if you count Ramsey as a CB) but he was unable to workout because of the lingering hamstring injury. It’s extremely unfortunate for Alexander but should not affect his draft stock.

Eli Apple, CB, Ohio State: Apple is a polarizing prospect and some think he’s a first round prospect while others thing he’s more for the middle of the second round or later. Apple did not do all of the testing, but the 4.40 40 with a 1.47 10-yard split is going to do wonders for his stock. Not to mention that he looked very natural in the drills and showed good ability to turn and run.

Artie Burns, CB, Miami (FL): Burns is a prospect that is not often talked about but he turned some heads with his 40 time. He posted a 4.46 40 with a 1.53 10-yard split and a 31.5″ vertical. Unfortunately for Burns, he looked very raw in drills and seems to be more of a developmental prospect right now. He does have the physical tools to be successful though. His pro career will likely depend on which team he ends up on and how patient they are.

KJ Dillon, S, West Virginia: One of the top safeties in the draft and a pretty athletic one at that. Dillon posted a 4.53 40 with a 1.50 10-yard split and a 10’1″ broad jump. He looked a bit stiff during drills, which is not to be unexpected for a safety, but he showed off some above average ball skills and should be just fine.

Deiondre Hall, CB, Northern Iowa: Hall is a personal favorite of mine, and I’m very interested to see where he ends up getting drafted. Hall weighed in at 6’1.5″ 199 lbs so he’s got the ideal size, but he ran a 4.68 40 (1.59 split), which is not ideal. He does have a 37″ vertical and a 10’7″ broad jump so he does have some explosiveness, which does not help explain the slower 40 time. That being said, he looked very fluid in his backpedal during drills and showed good ball skills. I think he’s on the rise and is a name to watch right now.

Vernon Hargreaves III, CB, Florida: VH3 is very highly regarded and arguably the 2nd best cornerback in the draft (again, depending on where you put Ramsey). VH3 put up a 4.50 40 (1.53 10-yard split) so it’s good that he has the speed to combat his shorter size (5’10” 204 lbs). He also posted a 39″ vertical and a 10’10” broad jump so the explosiveness is there. In drills he showed off excellent ball skills and looked very refined in his technique. He’s very smooth in his movements which is key when you are not a bigger corner.

William Jackson III, CB, Houston: William Jackson III is a cornerback that is on the rise with a lot of people and has worked his way into the first round discussion at this point. He weighed in at 6′ 189 lbs and then ran a blazing 4.37 40 with a 1.44 10-yard split. He paired that with a 9’8″ broad jump, which is not great, but does not matter considering the 40 time. He showed off great ball skills in the drills (despite a drop in the gauntlet) and was great at high pointing the football. He was very smooth in his movements, like VH3, and did a good job of getting out of his breaks.

Cyrus Jones, CB, Alabama: Jones basically locked himself in as a nickel corner/return man with this Combine performance. Cyrus is only 5’9″ 197 lbs but he ran a 4.49 40 (1.50 10-yard split), a 33″ vertical and a 9’8″ broad jump. His 3 cone drill was very impressive (6.71 seconds) and that short area quickness is going to be a major asset for him at the next level. He’s got great ball skills (obviously) and while his technique at corner is not perfect, it was a lot better than anticipated.

Jonathan Jones, CB, Auburn: Jonathan Jones was a big time winner on Day 4. He only weighed in at 5’9″ 186 lbs but he ran a 4.33 40 with a 1.47 10-yard split. Then he added 19 reps on the bench, a 36″ vertical and a 10’3″ broad jump. Jones is a very explosive athlete and that 40 time is going to have people going back to check the tape on him. He did an excellent job getting in and out of his breaks and even though he had a few drops, he had one of the best one-handed catches of the day.

To put into comparison how fast Cyrus Jones’ 3 cone drill time was, Jonathan posted a 7.25.

Derrick Kindred, S, TCU: Kindred came into Indy and ended up proving that he is one of the more athletic safety prospects in the Draft. He weighed in at 5’10” 207 lbs and posted a 4.59 40 (1.58 10-yard split), then posted a 37.5″ vertical and a 10’3″ broad jump. Kindred had pretty good ball skills in drills and showed off his excellent hip movement skills. He does a good job of flipping them for a safety, so good in fact that I had to make a clip of it. These types of movement skills will help him big time in the NFL.

Jalen Ramsey, CB/S, Florida State: Ramsey is a freak athlete who went ahead and checked off all the boxes at the Combine. At 6’1″ 209 lbs he ran a 4.41 40 (1.52 10-yard split), then had a 41.5″ vertical and an 11’3″ broad jump. Just pure nastiness. He’s a top 3 player in this draft for me and he proved it in Indianapolis. He does an excellent job of coming up out of his backpedal and flips his hips like a superb athlete. His ball skills were very solid and his elite ability to come out of his breaks and attack down field make a lot of people think he’s a safety at the next level.

We’re almost done here, folks. The winners and losers post will be posted tomorrow, so for now enjoy this video…