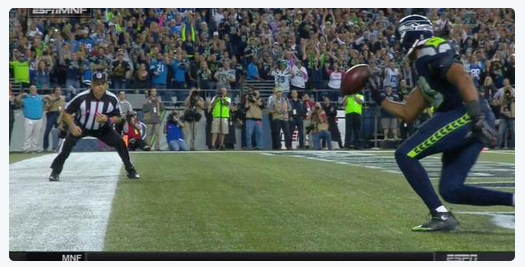 I was not going to write about the Detroit Lions this year. After they went in for halftime against the San Diego Chargers, their season has been nothing but a total disaster. Joe Lombardi has turned the offense into a joke and the offensive line is in total shambles. The defense has done more than their share, with crucial injuries to players throughout the year, and they still cannot get a win. Teryl Austin is going to be a head coach somewhere next season for the job that he has done. I was starting to expect this team to fold and get to 0-5 and then start focusing on the NFL Draft.

Of course the Lions had to lose this way. When my dad called me all he could do was laugh and say that this was unbelievable. And really, at this point it is. Could the Lions lose in a more Lions-esque way? I’m not sure. It was not enough that the Lions found a new way to lose with Calvin fumbling at the one-foot line and out of the back of the end zone after Matthew Stafford led a brilliant drive. Nope, Gerry Austin had to get on my television after the game was over and tell me that the referees had screwed the Lions…again.

Here's the rule that states Seattle illegally batted the ball and Detroit should have had 1st-and-goal. pic.twitter.com/GS3DVVfr4L

I guarantee you that very few people knew about this rule. Pete Prisco was the only National writer I saw pick up on it. But that does not mean that this should go ignored. Thankfully, this is the one time that ESPN will be good for something and they will incessantly stir the pot by discussing this topic until it is good and dead.

It's illegal to bat or punch the ball like Wagner did

Should have been a 5-yard penalty from the spot of the fumble — half the distance. Officials screwed that up.

After the game you had guys like Steve Young totally befuddled that this was not called more with Punters and Quarterbacks knocking the ball out of the end zone to prevent touchdowns…but on such a play, a safety is assessed so the flag is not thrown. Nope, not until Monday has there been something like this, that explains why the referee was hesitant to call it…because no one had done it before…right? RIGHT?!!?

Illegal bat happened in Seahawks-49ers came in December 2013; Seattle was flagged but still benefited from it http://t.co/O1s2Wrbny5

So the Seahawks players said they did not know it was a penalty, but had been flagged for it less than two years ago. Awesome. I mean, you really just cannot make this stuff up at this point. How do you have officials calling games that do not know the rules? What is the purpose of having a rule book if people are not going to read it? At what point is enough, enough? How many rules do the Lions have to introduce fans to?

I mean this is basically the second Calvin Johnson Rule. There is no reason at this point for there not to be a review committee that is reviewing every single play in the NFL as it happens. The NHL can do it and they generate about 1/10th the revenue that the NFL does. The NFL could set up an East Coast HQ and a West Coast HQ and still have billions of dollars leftover. The point is, there needs to be change. Officials need to be held accountable. Ray Lewis touched on it last night and I couldn’t possibly agree more. Players put their bodies and minds at risk week in and week out to get wins. I watched Haloti Ngata, Darius Slay, Travis Lewis and Tyrunn Walker all get hurt during the game last night. And for what? For the referees to get a rule wrong at the most important time of the game? The players and coaches and fans do not get this back. The Lions season is over and all they’re going to get is a “we’re sorry” letter or statement that might as well be from an episode of South Park.

You have players getting cut for poor performances and coaches getting fired during the season, fans paying good money to watch your product and you cannot even have refs that are able to call a game fairly and objectively and that is flat-out inexcusable. I mean the back judge looks straight at the play, reaches for his flag, clearly changes his mind and does not call anything. It’s awful.

you actually can see him reach for the flag and then think "wait a minute, this is the Lions" pic.twitter.com/AgKMjcH3YD

Now, I am a realist. I’m pissed as hell about the NFL’s referees and their lack of a system to prevent this kind of catastrophic mistake from happening. The current replay system just is not good enough. BUT, the Lions cannot put themselves in this situation. You cannot run 53 plays on offense during a game and expect to win. You cannot go three-and-out twice after your defense gets two huge turnovers on the road playing Seattle. I’m blaming the refs for doing a horrible job and for not letting the Lions squeak out a win. A win they desperately needed. But I’m not going to blame them completely. You cannot ever put yourself in a situation that allows the referees to have such a monumental impact on a game. Not when you have the talent that you do. And this is what brings me full-circle back to Joe Lombardi. Fire this man. He is a god awful offensive coordinator that does not understand how to call plays. He thinks the Lions brought him in for his system he used with the Saints, but they didn’t. The bottom line is, not all receivers are created equal on the Lions and not all of them should be targeted equally, this isn’t New Orleans. Change your play calling and direction of the offense or put your house up for sale. Enough is enough.

I still love you, Calvin.

Johnson when asked about batted ball: "At the end of the day I have to hang onto the ball. Can't leave it in officials hands."

I look forward to next week when the Lions lose by goaltending a field goal. (Also a real rule.)

So Dean Blandino agrees its a blown call, and play happened in the final 2 mins and should be automatic replay and no one does anything?

.@MikePereira said on @FOXSportsLive that college replay could have reviewed that Lions no-call because it qualifies as a "egregious error."

Even Pete Carroll admits Wright was "TRYING" to knock the ball out https://t.co/80pm2W4El6

Personally, I think the referee was reaching for his fumble bean bag and grabbed the wrong one because this photo is from before the bat, but that’s still another flag getting picked up and no explanation being given.

@ttwentyman Tim ref front the front pylon threw his flag…than picked it up. Flag was thrown. No explanation for pick up

And finally, how you know Bill Belichick is the greatest coach ever: