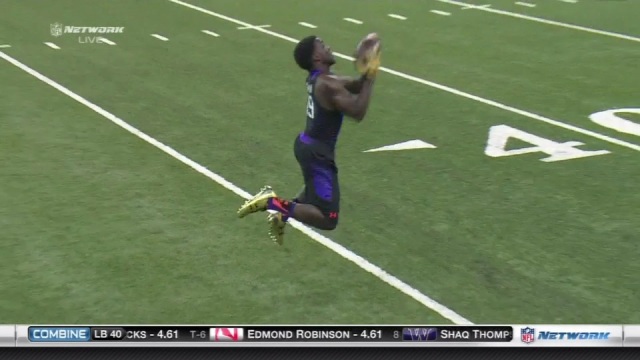 This was probably the most disappointing day in terms of coverage from NFL Network. They spent a lot of time talking about anything but the guys on the field and showing commercials instead of actual drills on the field. There was almost no video of the second group of DBs outside of the 40-yard-dash times.

Jalen Collins, CB, LSU: Jalen is one of the bigger corners in the draft at 6’1″ 203 lbs. Only 4 DBs measured at 6’2″ or above, so for a league going to bigger DBs, that’s not exactly enough to stock the cupboard. This should help Jalen’s stock, as well as running a 4.48 40 with a 36″ vertical and a 10’4″ broad jump. He looked good in drills flipping his hips and tracking the ball as well.

Landon Collins, S, Alabama: The clearcut #1 safety in the entire Draft. Safety is an extremely weak position group this year and Collins will be a lock for round 1 because of it. He showed solid athleticism, running a 4.53 40 with a 35″ vertical and a 10′ broad jump. He didn’t do anything to “wow” anyone, but he’s 6′ 228 lbs and is a phenomenal player when it comes to coming up and supporting the run.

Justin Cox, CB, Mississippi State: Cox weighed in at 6′ 191 lbs and then posted a 4.36 40 with 15 reps on the bench, a 38″ vertical and a 10’9″ broad jump. He certainly helped his stock by testing well, but he still looked very stiff in drills when flipping his hips.

Ronald Darby, CB, FSU: Darby is an extremely athletic player and it was on full display at the Combine. He’s 5’10” 193 lbs and posted a 4.38 40 time with 12 reps on the bench, a 41.5″ vertical and a 10’9″ broad jump. Like the other natural corners, he was very smooth coming out of his breaks and flipping his hips. He also showed some very good ball skills during the gauntlet drill.

Charles Gaines, CB, Louisville: Gaines started his career as a wide receiver and moved to cornerback in 2013. After one year at cornerback, he decided to enter the draft. He’s only 5’9″ 180 lbs, but ran pretty well, posting a 4.44 40 time. He then added a 34.5″ vertical and a 10’3″ broad jump. Obviously he needs some work with only one year at cornerback, but he’s got some potential to play nickel.

Senquez Golson, CB, Ole Miss: Senquez Golson has the best ball skills in the NFL Draft outside of Gerod Holliman. Outside of that, his size (5’8.5″ 176 lbs) probably limits him to being a nickel corner in the NFL. That’s not a bad thing by any means though. He’s a quick-moving corner (4.46 40) with adequate strength (15 reps) and has a 33.5″ vertical and a 10′ broad jump. He won’t “wow” you in any particular area, but he’s a good football player and is excellent at tracking the football.

Gerod Holliman, CB, Louisville: Very highly touted because of his ball skills, but he can’t tackle at all. He’s going to be a project and quite frankly the fact he didn’t work out at all says quite a bit about how ready he is to showcase his talents. 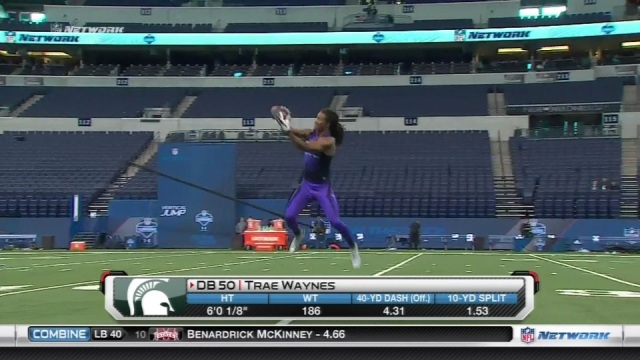 Kevin Johnson, CB, Wake Forest: Johnson had himself a productive day during the timing drills on Monday. At 6′ 188 lbs, he posted a 4.52 40 with a 41.5″ vertical and a 10’10” broad jump. Johnson was the first DB of group two and I didn’t see him in a single on-field drill. Quite unfortunate because his measurables make him an intriguing prospect.

Byron Jones, CB, UConn: Byron Jones is absolutely a freak athletically and he didn’t even get to showcase his full-range of talents because of a shoulder injury he suffered in October. He didn’t run the 40-yard dash or participate in the on-field drills, but he did break the previous broad jump by a casual 8 inches. A 12’3″ vertical and a 44.5″ vertical is absolutely nuts. He also turned in the 5th fastest 3-cone drill, the 3rd fastest short shuttle and the fastest 60-yard shuttle. It will be interesting to see what kind of 40 time he will have, but I’m guess it will be fast.

Marcus Peters, CB, Washington: If he hadn’t gotten kicked out of Washington, I think it’s fair to say he would be the #1 rated cornerback in the Draft. He’s a natural press corner and while he doesn’t have incredible speed, he doesn’t need it. At 5’11” 197 lbs, he ran a 4.53 40 with 17 reps on the bench a 37.5″ vertical and a 10’1″ broad jump. He has more than adequate athleticism and if can answer the off-the-field questions, he’ll go round 1.

Quinten Rollins, CB, Miami (OH): Another intriguing prospect that spent most of his career as a basketball player. He’s only played one year of football and the sky is the limit it seems. He showed natural cover ability at the Senior Bowl and looked very natural in the few drills that were shown. He weighed in at 5’11” 195 lbs with a 4.57 40 with 14 reps on the bench, with 36.5″ vertical and a 10’2″ broad jump. He doesn’t have elite athleticism, but it’s enough of a base line to work with it as a team molds his skills. He is, after all, going to be a project.

Josh Shaw, CB, USC: An intriguing prospect to say the least. Shaw was kicked off the USC football team for a bizarre incident where he claimed he got hurt saving his nephew from drowning but was actually running from the police. Regardless of that, he’s shown that he can play football. At 6′ 201 lbs he ran a 4.44 40-yard dash and added 26 reps on the bench with a 37.5″ vertical and a 10’10” broad jump. He’s a very explosive player with some solid size. It would not surprise me to see him play some safety, seeing as he played both corner and safety in college.

Trae Waynes, CB, MSU: Bar none the biggest winner of the day. His biggest knock going into the Combine was his speed and he posted the fastest DB time with a 4.31 40-time. Suffice it to say he is a first round lock. He checked in at 6′ 186 lbs with a 38″ vertical, 19 reps on the bench and a 10’2″ broad jump. Easily looked the most fluid and natural going through the drills and was one of the few players that NFL Network made sure to show. As you can see, he’s smooth coming out of his breaks and can do a good job high-pointing the football.

One of the big issues I had with the NFL Network coverage, other than the lack of drills being shown, was their player comparison graphic. Mike Mayock had a big issue with it too and made sure that he wanted everyone to know that it wasn’t his comparisons. 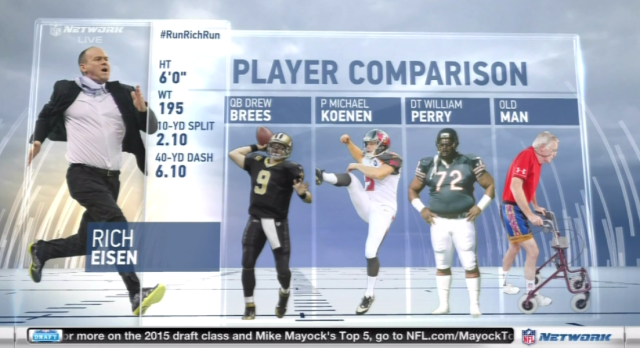 They changed it up for Rich a bit, but the comparisons they used for the actual players was just as big of a joke as this. See for yourself:

This comic from The Draw Play probably covers most opinions on the Combine: