Brady Hoke Has Been Fired: What Now?

Posted on December 2, 2014 by Jeff Weintraub 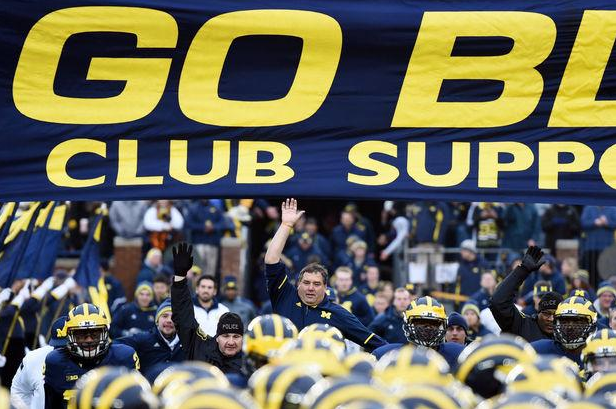 I’ll have a full recap of the season up at some point, but now it’s time to discuss the most important piece of news. Brady Hoke has been fired.

Source has confirmed that Brady Hoke has been fired from post as #Michigan's head football coach. Team to be briefed during 3pm meeting

It’s unfortunate that it came down to this. A guy that showed so much promise with his opening press conference and his first season with Rich Rodriguez’s players, eventually went up in flames. It’s too bad, he seemed like the perfect man for the job. He was a nice guy, genuinely cared about the kids, had a deep love for the school, and it was his so-called dream job. He did a good job of saying all the right things that the boosters wanted to hear about Michigan. He brought back former players to talk to the team and recruited with the best of them. Unfortunately in the end, it just wasn’t meant to be and the results were never seen on the field. I do feel bad for him, how could you not?

The defense improved each year, and Greg Mattison was great during his time here, but the offense and team regressed so poorly each year that they could hardly move the football and ended Hoke’s final season at 5-7. It became apparent that Doug Nussmeier wasn’t the savior people hoped and thought he could be once Al Borges was canned.. That comes down to the position coaches doing such a horrific job teaching players that the offense wasn’t fixable and Nussmeier couldn’t fix the lack of player development with his magic wand. I’ve never seen so many four and five-stars on one team in my life that managed to produce so little.

Now I could continue to bash Hoke and his staff and his failures but that would really be beating a dead horse at this point. You know what he failed at and how bad it is. I don’t need to repeat how he failed at developing players for 1,000 words. The question is, how does the program rebound and who is the new coach to lead the way?

I’m a pessimist. Personally, I don’t think the program will rebound and I think that Michigan will continue to be irrelevant on a national scale for quite some time. It’s awful to say but it’s just honesty. It will be another 2-3 years for the new coach to get his guys in place, after some of the current players transfer, and by that time who knows what will happen.

That being said, if the new coaching staff can right the ship, there is a lot of talent on the roster. Or at least it seems like there should be. The cupboard should be stocked full this time as opposed to what the last two coaches have had to deal with at the start of their tenure. 50 of the 56 players on the two-deep are returning and there are 43 players in their first two years of eligibility , so they aren’t total busts and completely lost causes yet.

If the right coaching staff is hired, the team could turn around quickly. The players need a swift kick in the ass. They’ve been coddled and have developed a prima donna attitude and have gotten soft. They need a hard ass to get them back into shape.

“Interim” AD Jim Hackett has quite a job on his hands. Personally, I hate the idea of him staying on for the next few years because I think Michigan needs someone who has actual experience as an athletic director in there. Inexperience is what got Michigan in this whole mess. Now if he stays on for only two years and then helps hire a full-time athletic director after getting the football program turned around, I can deal with it. Clearly they’re just trying to make it so that the new head coach and athletic director aren’t tied together. But I digress.

So, who are the candidates? I’ve seen at least ten names listed and some of them are completely ridiculous, so I’ll just give you five that I think are the top candidates/least crazy ones.

Jim Harbaugh, San Francisco 49ers Head Coach – I’m still not on board with this. I think Harbaugh is a lock to end up in Oakland with some roster control. I could be wrong. I would be happy to be wrong, since Harbaugh is my preferred choice for the job. But I think that Harbaugh’s competitiveness will keep him in the NFL trying to win a Super Bowl. The big negative here is if Harbaugh does in fact come, people will have such ridiculously high expectations of him that he probably won’t be able to meet them. On top of that, he will always be a flight risk to go to the NFL. I don’t see him as a guy who will be staying for life, but I could be wrong.

Michigan fans who want Jim Harbaugh… What happens when the Oakland Raiders offer him the HC job with player personnel control?

UPDATE: I had this written before the Football Scoop report saying that Jim Harbaugh has said no. So I figured I would just add a link to that right here. As you could expect, Michigan fans aren’t taking the news well.

But, you know, you can’t believe everything you read on the Internet.

Contrary to what's been reported, Jim Harbaugh will be a candidate for the Michigan job. And his one and only focus right now is the 49ers.

Anyone who says they "know" what Harbaugh is or isn't going to do is not in the loop.

Les Miles, LSU Head Coach – Been a candidate for each of the last two coaching searches and still has the rift with Lloyd Carr standing in his way. Three and Out tells you that this is his dream job and I firmly believe that he would take it if he was offered. It just depends on whether or not the school and the new AD is willing to upset Carr in order to make it happen.

John Harbaugh, Baltimore Ravens Head Coach – Unlikely at best, in my opinion. He has some remote ties here, but I don’t think he would take the job without Jim’s blessing and I certainly don’t think he would leave his cushy NFL job for a college job. He just got a contract extension, what’s the big rush? Not to mention apparently he’s friends with Hoke and he won’t pursue the job. But who knows, that’s just some speculation at this point.

Mike Gundy, Oklahoma State Head Coach – Apparently has a rift with a big time booster at Oklahoma State and has experience running a big program. Hasn’t won much of anything, but hell, you could do a lot worse than a guy who has gone 82-44 the last ten years. Nevermind the fact that he missed a bowl game this year after going 10-3 last year.

Jim McElwain, Colorado State Head Coach – A so-called home run hire by many people in the business. He has been discussed as one of the leading candidates for the Florida job. But the folks over at Football Scoop shot that one down with a series of tweets. 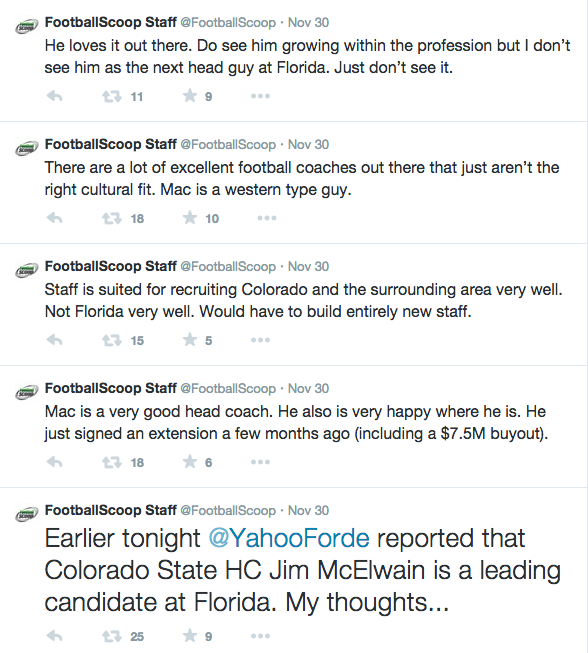 McElwain was the OC at Alabama from 2008-2011 until taking the head coaching gig at Colorado State. In his first season he went 4-8 and two years later he is sitting at 10-2. Sure it’s only the Mountain West Conference, but he runs a pro style offense and turned around that program pretty quickly. It’s not easy to recruit players to Colorado State. That all being said, he has a $7.5 million buyout, so you might as well scratch him off the list.

Butch Jones, Tennessee Head Coach – Butch Jones is an intriguing candidate but he has also apparently already said no. And it’s been said multiple times. He’s a program builder and I think that he’s going to be able to turn Tennessee around, but he’s not going to jump ship just yet. I personally don’t even think he’s been offered the job. In these types of situations, you have coach’s agents out trying to work the phones and help feed stuff to the media to get their clients an extension where they’re at.

Sources: Michigan “struggling” to find their next head coach http://t.co/nFGYtk4rfF

Some other names I’ve heard, all of which are total pipe dreams except for one: Pat Narduzzi, Michigan State DC (not a pipe dream but no coordinators), Mike Shanahan (lol no), Sean Payton (yeah, right), Bob Stoops, Oklahoma HC (another pipe dream), Jon Gruden (my dream, but the king of the pipe dream choices).

I don’t want Michigan to take a team’s coordinator. I want Michigan to take another team’s head coach. You’re still Michigan and you still have deep pockets. Do not put the faith of the program in an inexperienced head coach again. You cannot afford it. You need someone who has been in charge of a program before, preferably a big time one or preferably someone who has experience turning teams around. Just give me someone who knows how to win and doesn’t talk about doing their best or trying hard. That’s not always good enough.

Now I want to be very clear here. The person who ends up getting this job will probably be someone who has not been mentioned here. Someone that is off the board. It’s totally anyone’s guess at this point who the candidates are and who the supposed leader(s) for the job is. After Harbaugh and Miles, there aren’t any real clear-cut candidates. We’re just going to have to wait and see at this point. My advice? Buckle up, be patient, and keep hoping for San Francisco 49ers losses. And if/when Jim Harbaugh doesn’t show up, do NOT destroy the new coach before he can have any shot of success because you did not get what you wanted. Let the new coach have his chance to get the job done and get the program turned around. Don’t worry if he’s not a “Michigan Man.” Bo Schembechler and John Beilein weren’t and they turned out more than fine. A Michigan Man is a tired moniker that needs to be retired and the only one I see actually acting like one lately is Devin Gardner. It shouldn’t matter if the new head coach has Michigan ties or not. Beilein and Bo didn’t. Be a good man, and win. Those are my only two requests. It’s time for Michigan to put tradition to bed and fix the program.It’s not disrespectful to Bo or his memory if the program changes. Until we finally stop living in the past, this program will never get fixed.