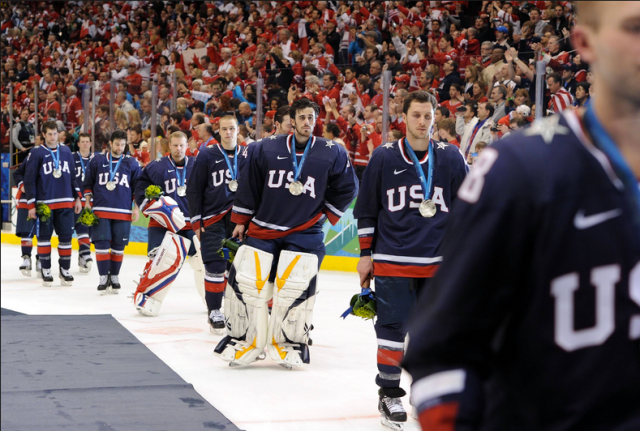 Back in the Summer of 2012, I did a projection for a potential USA Olympic team and it has changed a bit since then.  In this post I’m going to do a prediction of what I think the team will be and then I’ll put together the roster the way I would do it if I was the GM.

My first thoughts when looking at this is man, team USA would kill for some centers. It’s too bad they can’t trade some of their spare goalies to Canada and pickup one of their 20 spare centers. The weakness down the middle is going to be a problem for the U.S., especially if one of these four goes down before the Olympics start.  This team is going to have a great mix of size, skill and physicality.  I don’t know about you, but I wouldn’t want to play against a checking line of Brown, Backes (or Stastny) and Callahan.  This group has a solid 11-12 that are locks for the roster, but finishing it out could go either way.  It wouldn’t surprise me at all if Derek Stepan made the team, just to give them a 5th center.

Let me first say that if this happens, I’ll lose some respect for USA Hockey.  The amount of time Jack Johnson has put in for them, playing in World Championships when he doesn’t have to, only to get left off for a bucket of rocks like Keith Yandle or one of the most overrated players in the show (Paul Martin), would be a joke.  Yes, you have to put the best team on the ice, but the amount of International experience Johnson has compared to the rest is invaluable.  Predicting this group of D is pretty much a crap shoot, there are a lot of young guys that probably deserve to be on the roster, but won’t because of their age.

Jimmy Howard has not played well this year and has battled injury. Ben Bishop was terrible for team USA in the last World Championships and was replaced by John Gibson. Realistically, it doesn’t matter who the third goalie is because the first two are strongly solidified. Bishop has been playing at a very high level lately and is younger than Howard, so I think USA would give him the nod.  Regardless, Miller or Quick will play every minute of the tournament.

My Team USA for Sochi:

I’d honestly leave most of the forwards the same here. I’d love to find a way to move one of the wingers to get Blake Wheeler on the team, but there’s just no room for him. Swapping Pacioretty for Wheeler is pretty much a toss up, both are huge power forwards, but Pacioretty has more of a scoring touch and is a Michigan guy, so obviously I’d give him the nod.  This is going to be a very good group to go to Sochi with, probably the best team USA has had since 2002.

On defense, sub out Paul Martin for Jack Johnson and take out John Carlson for Dustin Byfuglien.  Jack Johnson has been loyal to USA Hockey and played in a ton of International events for them.  His experience, despite having some defenses lapses, would be huge for this defensive group.  Not to mention the fact that he always elevates his game for International play.  Plus, he’s playing on the Columbus “Hot Garbage” Blue Jackets, obviously he’s not going to be having a great year.  Martin is banged up again and is constantly injured.  He’s not good enough to put on the roster and be worth the headache if he gets hurt during the tournament.  Personally, I’d like to dress Byfuglien as a 13th forward to use in front of the net on power plays or to slide him back to the point on the power play to use his booming shot.  Byfuglien is an offensive playmaker and while he may not be reliable enough on defense to take a normal shift, you have to get him on the roster to put in some work on the power play.  The next four D on the bubble, Carlson, Fowler, Jones and Faulk is an absolutely fantastic group that is going to make for an amazing core for the future.  There is a pipeline of defenseman and goalies coming up for USA that will be huge.

Pretty straightforward.  If Jimmy is healthy, I take him.  The remaining three goalies don’t have the same track record of consistency and Bishop was god awful in last year’s World Championships.  Quick and Miller are no-brainers and are guaranteed spots barring injury.

Realistically my team isn’t that different from what I predict will happen.  The US has about 11 forwards, 6 defenseman and 2 goalies that are locks, so you’re really just arguing depth/glue guys for the tournament.  Hopefully Dave Poile and Dan Bylsma know what they’re doing.  I still think Canada is the favorite, but if the US gets some good play out of Quick/Miller, they’re going to be a very tough out.  Let’s hope they play better than their uniforms look when they get to Sochi.