Michigan vs. UConn: I Think The Sky Might Be Falling

I had hoped to avoid writing about the Akron and UConn games but they ended up being two of the worst games that Michigan has played in a while.  To be fair, I thought the defense was fantastic and clearly isn’t the issue.  Two of the touchdowns were on the offense and special teams.  One touchdown was a fumble return and the other the defense was put in a bad spot after the punt hit Da’Mario Jones’ leg and UConn started at Michigan’s 9-yard line.

The bye week could not have come at a better time for this team, especially the offense.  Devin Gardner has been looking more like Denard Robinson in the pocket than himself.  In Gardner’s defense, the protection by the interior line wasn’t good against UConn, and Jack Miller was dominated the whole game.  I said in a previous post that Miller could get replaced if he didn’t improve and that is exactly what Brady Hoke has done for the Minnesota game.  Graham Glasgow will move from LG to C, and Chris Bryant will jump in at LG.  Hopefully this will improve the pass protection and Gardner will lose the happy feet.  A lot of times Gardner wasn’t setting his feet and he was throwing off of his back foot.  This is why a lot of his throws have been sailing high and some of his poor reads have resulted in interceptions this season.  Overall though, he’s not playing as badly as the stat line is showing, Gardner has shown that he still has the ability to run very effectively (when he isn’t fumbling).  When Gardner decides to run, he needs to be more careful with the ball.  A lot of times he runs with the ball out away from his body, like he’s carrying a loaf of bread.  Eventually this will come back to bite him and better ball protection should cut down on the fumbling, I hope.  I think another issue is that some of the play calling has been brutal the past two games, and I would much rather see the game plan that was used for the Notre Dame game.  Hopefully a shuffled offensive line with a better game plan will result in Gardner playing better, feeling more comfortable in the pocket and keep him from being a turnover machine. 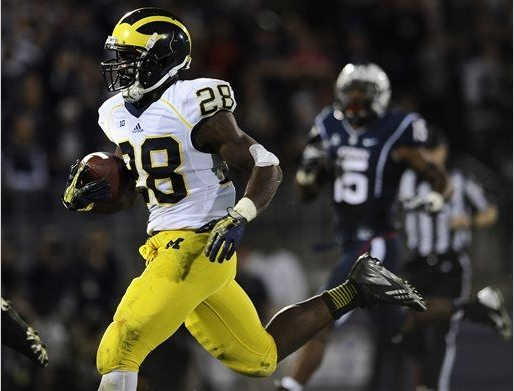 Fitzgerald Toussaint finally showed some life int he running game with 24 rushes for 120 yards and two touchdowns.  His most impressive game thus far in my opinion, and couldn’t have come at a better time.  The inefficient passing game was in dire need of a boost and hopefully Toussaint won’t disappear after this big game.  Hopefully Derrick Green will be able to get more touches going forward, because they need a change of pace running back so Toussaint doesn’t have to shoulder the load every single game.

The tight ends did not have a good game, plain and simple.  A.J. Williams and Devin Funchess were flat out awful when they were blocking and thankfully Jake Butt came in and was able help out.  There’s not much to evaluate the receivers on when your quarterback only throws for 111 yards, but Jeehu Chesson misjudged one deep ball that would have been a free touchdown and he should have played better defense when it became clear the corner was going to intercept that jump ball.  I think it may be time to split Funchess out wide at receiver, in the slot or outside, and put Gallon in the slot to try and create more mismatches.  Obviously, Funchess is an athletic mismatch at tight end, but until he improves his blocking, he’s no help in the run game.  Another change I would like to see is with the use of Dennis Norfleet.  Every time he goes on the field, he gets the ball on a jet sweep and teams know this.  Michigan needs to put him out there in situations where he doesn’t always get the ball, so teams don’t just assume that Norfleet will be the ball carrier when he gets out there.  It’s time to open up the playbook a bit more.

The offensive line turned in just an okay day overall at best.  Taylor Lewan, Graham Glasgow and Michael Schofield were solid, minus the sack Lewan gave up.  Jack Miller was a major issue and was dominated the entire game.  Kyle Kalis turned in his worst game yet, but I think part of that issue was the lack of success Miller had blocking.  Add that into the horrible blocking by the tight ends, and that is a recipe for an inefficient offense.  The shuffled offensive line will be interesting to see and I have high hopes that it will be much improved with the changes.

Defensively I thought the defense was great, and it was the most effective the pass rushing has been all season.  Greg Mattison continues to prove his value as defensive coordinator game in and game out.  Frank Clark finally got pressure on the quarterback and recorded 1.5 sacks.  Clark is going to need to stay productive until Jake Ryan gets back, because without him they don’t seem to get much pass rush.  As a team they put together four sacks, which was encouraging, but it was still only UConn.  Jibreel Black was the other major performer on the defensive line and he has clearly solidified his spot as the best defensive tackle on the roster right now.  I thought Chris Wormley, Mario Ojemudia and Willie Henry turned in solid performances, but it just shows you how young this team is.  All three of them are in the first two years of their eligibility and two of them are redshirt freshmen.

The linebacking core had a solid day and Desmond Morgan had the game-saving interception to go along with his stellar performance.  I’ve been really pleased with the strides Morgan has made as a player and he has proved to be the best linebacker on the roster, excluding Jake Ryan of course.  James Ross was his typically productive self, giving Michigan two great starting linebackers.  The issue was on the strong side, where Brennan Beyer didn’t play very well at all and Joe Bolden turned in another underwhelming performance.  As I’ve said multiple times already, once Ryan is back and Beyer moves back down to defensive end, this defense will be even better.  Bolden needs to get out of whatever funk he is in and start playing better, especially in pass coverage where he has gotten routinely burned.

The secondary was pretty good, as per usual.  Blake Countess and Raymon Taylor have formed a solid duo and Jarrod Wilson and Thomas Gordon were solid at safety.  Gordon is very good at wrapping up on tackles, and he has replaced Jordan Kovacs as the last line of defense nicely, even though Gordon is a strong safety.  I was surprised, again, at the lack of playing time for Channing Stribling and Delonte Hollowell, and I don’t remember seeing them on the field even once.  Courtney Avery is clearly the third corner, even though he didn’t have a great day and was burned badly on the touchdown that was called back.

The defense clearly wasn’t the issue and quite frankly, hasn’t been all season.  If not for the defense this Michigan team isn’t undefeated, plain and simple.  Unless the offense turns it around with the new offensive line, this team will struggle down the stretch.  Yes, they are 4-0 and I will never complain about that, but they are lucky to be 4-0.  Without improvement moving the football and improved ball security, Big Ten play will be rough on this team.  This next game against Minnesota will tell a lot about the future of this team going forward.