The Losers of the NFL Scouting Combine

Just like there are players at the NFL Scouting Combine that raise their stock, there will always be players that lower their stock by turning in poor workouts or having poor interviews.  The players aren’t ranked in any particular order (well other than alphabetical order), but these guys need a good showing at their Pro Days in order to turn things around.  To see my first Mock Draft of the year, click here.

Johnthan Banks (CB, Mississippi State):  Banks won the Jim Thorpe Award last season for being the nation’s best defensive back.  Banks had a good year and was good on film.  He’s a bigger corner, but unfortunately for him, he showed up to the Combine and ran a horrible 40-yard-dash.  Putting up a 4.6 40-yard-dash as a cornerback is a huge issue, because it raises questions of whether or not he can keep up with opposing wide receivers.  Banks then added only 10 reps on the bench and a 34″ vertical, which only raised more questions about his strength and athleticism.  He’s going to need a solid Pro Day to repair the damage he did to his stock at the Combine. 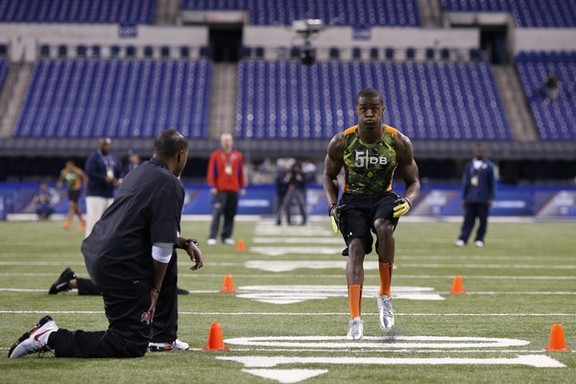 Collin Klein (QB, Kansas State):  Klein was asked by the NFL to workout with the Tight Ends and with the Quarterbacks, but unlike Denard Robinson, he doesn’t see his quarterback career ending in college.  Klein elected to throw at the Combine and showed off brutal mechanics and sub-par arm strength.  Klein was penciled in to be a late round pick but after refusing to switch positions and then performing poorly, I’m not sure if the Kansas State star will even get picked at all.  He ran a 4.78 40-yard-dash and is 6’5″ 226 lbs, so a position switch to tight end is the only way to save his NFL career.  Time for Klein to get a reality check and save his future.

Sam Montgomery (DE, LSU):  Montgomery performed very well during the drills, but it was his interviews that hurt him.  During his press conference, he admitted to taking plays off against lesser competition which was a terribly stupid thing to do.  Teams don’t want to hear about the times you took plays off and they want you giving 100% at all times.  Montgomery taking plays off obviously makes sense given the list that was posted by an LSU Administrator’s office though. 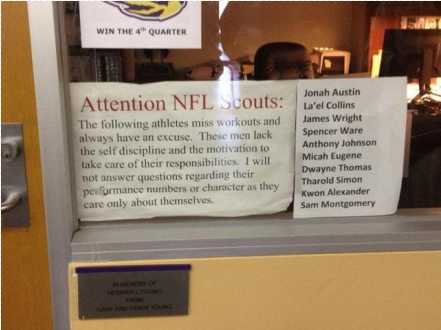 Montgomery ran a 4.81 40-yard-dash at 6’3″ 262 lbs, and was very fluid going through his drills and showed good quickness of the snap.  His stock shouldn’t be hurt too terribly, but teams will be concerned about his attitude and potential to be a bust because he takes plays off.

Damontre Moore (DE, Texas A&M):  My guess is Damontre Moore would like to go back in time and re-do his week at the NFL Combine.  Moore never showed that he was a speedy player on film, but posting a 4.95 40-yard-dash time was bad for him.  Almost as bad as putting up a measly 12 reps on the bench press.  He showed some quickness during drills, but was very stiff in his movements.  The play that he showed on film did not show up at the Combine and that is going to raise questions about his abilities.

Alec Ogletree (LB, Georgia): Alec Ogletree is a freak on tape and in the weight room.  The only thing that is holding him back is his legal issues.  Unfortunately for him, he added a DUI to his resume just prior to the Combine, and this will undoubtedly hurt his stock.  If he can stay out of trouble he will be in great shape.  He’s essentially this year’s Janoris Jenkins, a guy that could win rookie of the year if he can keep his act together.  Ogletree performed well on the field, running a 4.7 40-yard-dash and put up 20 reps on the bench, but showed that he needs to improve his coverage ability.

Stepfan Taylor (RB, Stanford):  Taylor was a very productive runningback in college, but at the Combine he showed off that being a college runningback could be all that he is going to do in his career.  Taylor weighed in at 5’9″ 214 lbs, posted a 4.76 40-yard-dash and posted 17 reps on the bench.  His vertical was 30 inches which raised more questions about his athleticism.  He had trouble catching the football in drills and obviously had a serious lack of quickness.  Taylor will be limited as a powerback that plays in short yardage situations and it will be tough for him to do more than just share carries.

Manti Te’o (LB, Notre Dame):  Te’o started off the week very well.  It began with his press conference where he faced the media in person for the first time and handled all of his questions very well.  He seemed to be open and honest with the reporters.  Unfortunately for him, once he got on the field, it was all down hill.  He weighed in at 15 less pounds than he was listed at during the season, meaning that he cut weight to run a better 40-yard-dash time.  He didn’t do so, and posted a very slow 4.82 time.  He didn’t lift at the Combine, and it was likely because he was cutting weight to run faster and knew that if he benched he wouldn’t be as strong.  During drills he looked very stiff and slow, and then was the only player at the Combine that offered an excuse saying the pressure got to him and that’s why he was slow.  You mean to tell me only one player of the 330+ that were invited complained?  It makes me wonder if he is mentally tough enough for the NFL.

Chase Thomas (LB, Stanford):  Thomas is a very good linebacker on tape.  He makes a lot of plays and is certainly a good player.  Unfortunately for him he was very slow 4.91 and overall an unathletic linebacker.  He posted 18 reps on the bench, and a 32″ vertical at 6’3″ 244 lbs is troubling.  He struggled in the coverage drills and didn’t show very good quickness during the drills.  Thomas will still get drafted because of what he put on film but he has some ground to make up and needs to perform better at his Pro Day.

There were some other players that were losers at the NFL Combine, but more so because of injury/health issues than poor workouts.  I almost included Matt Barkley in this group, but apparently he’s thrown very well since the Combine and had great interviews all week, so he didn’t really fit the bill of hurting his stock.

Jarvis Jones (OLB, Georgia):  Jones health was flagged medically for his Spinal Stenosis which is essentially a narrowing of the spinal column.  He didn’t work out during any of the drills, and there are some teams that are worried about whether or not he will last in the NFL.  Spinal stenosis has ended many players careers, most recently Marcus McNeill, who was a Pro Bowl left tackle for the San Diego Chargers prior to being forced into retirement.  It will be interesting to see how his Pro Day goes and how concerned teams are with his long-term health.

Star Lotulelei (DT, Utah):  During his medical exams Lotulelei showed that he has a heart condition where his left ventricle only pumps at 44% power.  How he was able to play football this past year with this condition is utterly beyond me, and the NFL wouldn’t let him work out at the Combine once the condition showed up during their tests.  Lotulelei draft status is completely up in the air until the results from meeting with a specialist become public.  I hope for his sake he gets cleared medically and is able to pursue his NFL dream.

As always, the NFL and the media puts too much stock into players measurables and a bad Combine isn’t necessarily the end of the world.  That being said, all of these players had bad weeks and could use a very good Pro Day to make up for it.