Michigan vs. South Carolina: An Outback Bowl to forget

It all started with the uniforms.  There were three different shades of “maize” used on the uniforms, and the numbers were nearly impossible to see on TV and even worse in person.  I get it, it’s “for the kids” and to help with recruiting.  I don’t see Alabama or USC doing it, and they seem to recruit just fine, year after year.  Is it the end of the world when Michigan does it? No, of course not.  But if you’re going to do it, at least make the uniforms look good.  It’s embarrassing when the announcers have to preface the broadcast by saying they might get numbers wrong because they can’t see them.  If you’re going to do something half-assed, don’t do it at all.

Jadeveon Clowney. Just wow.  I had been concerned with him going into the game, and watching the game didn’t alleviate any of my concern.  Clowney is simply a stud and he makes everyone around him better.  If he was draft eligible this year, he would be going #1 overall, there’s not a doubt in my mind.

At least Vincent Smith found a way to immortalize himself in college football history?  This hit will be talked about for decades to come, and you know it will be played on a loop about 100 times during the 2014 NFL Draft when Clowney goes #1.  I’m pretty sure if I got hit like this that I would never move again, and by pretty sure, I mean I guarantee.  It looks more and more painful everytime I watch it.

On top of that, I said to watch out for Ace Sanders.  Actually, here’s the direct quote of what I said:

Sanders can score anytime he touches the ball, and is an unbelievable punt returner.  The kid has some skills and I hope Matt Wile, who will be punting in place of Will Hagerup, chooses to kick the ball out of bounds rather than kick it to Sanders.  He is a game changer, and Steve Spurrier will do whatever he can to get the ball in his best playmakers hands.

This is what happens when you outkick your coverage.  Yes, it was an awesome punt by Wile, but he literally kicked it too far.  You can’t give Sanders that much room on the field.  It has nothing to do with the punt alignment or spread punt vs normal, that is completely overrated.  The only reason teams use the spread punt is to be able to fake it whenever they want, but it doesn’t provide better protection against block punts or provide better coverage downfield.  If that were true, NFL teams would be using it far more often.

Also, Sanders having 9 receptions for 92 yards and 2 TDs to go with his punt return?  I know they said Clowney was the player of the game, but it was clearly Ace.  He played fantastic, and so did both of their quarterbacks.  Connor Shaw and Dylan Thompson were completely effective, and pretty much had their way with the Michigan defense all game.

That being said, I was not expecting a back and forth shootout-esque game.  Michigan’s defense simply could not keep up with South Carolina, and the Gamecock’s shredded the secondary.  I’m not saying J.T. Floyd would have made a massive difference when you give up 341 yards, but he definitely would have helped.   Giving up 426 total yards and 33 points was crippling.  They looked as though they prepared for a run-heavy offense, and the heavy passing Fun ‘N Gun that USC came out in threw them off

The defense was the big liability and reason for losing the game.  To be honest, I can live with that.  A lot of the games this year, Michigan won because their defense bailed out the offense and made stops when they needed them too.  There were more missed tackles than we’re used to seeing, and they were clearly costly on the final drive.  There’s really nothing positive to say about the defense, when you get beat like that, everyone is at fault.  It will be interesting to see who steps up in the spring to replace Craig Roh and Jordan Kovacs.  Both of them have been key cogs on the defense, and even though Kovacs isn’t great in coverage, he has been the best tackler on the team.  I can’t wait to see how much Jake Ryan, Joe Bolden and James Ross improve with another offseason under their belts.  Ryan is already scary-good and Bolden and Ross have the potential to be the exact same caliber, if not better.

Offensively, I was pretty pleased with what I saw.  Devin Gardner was pretty good, not great, but he flashed his supreme potential again.  His stats from this game won’t “wow” you, but he was effective.

Jeremy Gallon, meanwhile, emerged as the best receiver on the team.  He may be small, but that vertical allows him to go up and get any pass; 9 receptions for 145 yards and 2 TDs is simply an outstanding stat line.  I’ll bet that they give him the #21 legacy jersey next year, he was easily the best player we had on offense in the Outback Bowl.

I thought the play calling was decent, and I found myself wondering where this gameplan was against Ohio State.  I also loved Brady Hoke faking it on 4th down twice, it’s a bowl game and it doesn’t mean anything, so have some fun and pull out the stops.

The offensive line I thought played pretty well, except for some instances, but it was about as good as you could hope for.  I gave Taylor Lewan the narrow victory in his battle with Jadeveon Clowney, but he had his hands full.  He was pancaked once and there were a lot of times that another player came in to help him out, but he held his own for the most part. 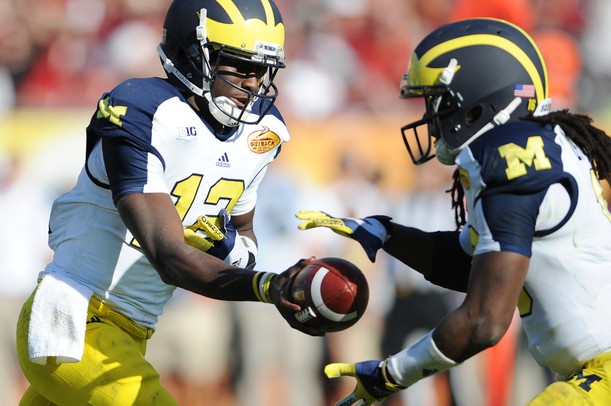 Denard Robinson at runningback reminded me of Chris Johnson, and no it wasn’t the dreads, they have similar running styles.  They’re incredibly fast, will make you miss and can take hits.  Say what you want about Chris Johnson and his dropping production in the NFL, but the dude is durable.  While Denard hasn’t been very durable throughout his career, he definitely passed the test in the Outback Bowl.  23 carries for 100 yards against an SEC defense that utterly pounded him?  I’ll take it.  He showed serious grit and further showed that he will literally do anything to get on the field and help the team.  A quality that I wish more Detroit Lions had…looking at you Titus Young.  His one pass was a complete wounded duck and he showed that his elbow is still not 100%.  He was never a perfect passer, but he always had a rocket arm.  It looks like that skill has not fully returned and it may never.  This game, much like his game against Iowa was a game that they used to give the NFL something to look at on film.  Everyone knows that he will show up to the combine and be an absolute workout warrior.  It’s really too bad we couldn’t send him out with a win, all of the Seniors that stuck around absolutely deserved it.

Everyone with high expectations for next year should temper them.  Yes, they are putting together another excellent recruiting class, but they will have about 52 of their 85 scholarship players in the first two years of their NCAA eligibility.  I cannot stress how young of a team that is.  They don’t have a runningback, and they are losing 4 of their 5 starters on the offensive line, assuming Taylor Lewan does what is expected and declares for the Draft.  Yes, Gardner will be a better quarterback than Denard in the long run, but next year there will be a lot of growing pains.  I wouldn’t expect more than 7-6 or 8-5 at the absolute max.  This team will have to be carried by their defense, which will also be a very young unit.  Brady Hoke is rebuilding this program and trying to restock the cupboard that was almost completely bare.  We’ll talk more about next year after the Spring Game.  There’s a lot of questions that remain, and unless Michigan adds Derrick Green to their recruiting class, their running game will not exist next season.  Hopefully the Spring Game will answer some of the questions.

1 Response to Michigan vs. South Carolina: An Outback Bowl to forget