I’ve been waiting for this week for a while now.  The week where some writer steps up his game and bursts onto the scene for not having a clue in the world about College Football. Now I’ll admit everyone makes mistakes.  I severely underestimated Kansas State and completely ignored the fact that West Virginia has no defense.  I figured that WVU would just outscore everyone and it wouldn’t be a big deal, but man their offense has looked pathetic.  I’m plenty happy to admit that mistake, that being said, these guys were riding the struggle bus when they turned in their polls.

I actually tweeted at this guy one week after he put out a terrible poll and criticized him…he didn’t have anything bad to say when he responded and I was pretty surprised considering he was a buckeye fan.  He was actually pretty cool about the whole thing, he actually offered me some advice/encouragement and I gained a lot of respect for him.

However, Oregon State at #6, Texas Tech at #9, Ohio at #18 and Mississippi State at #23 are pretty bad.  I don’t mind the fact that he’s got Florida over Alabama, sure it won’t actually end up that way, but based on strength of schedule and the quality wins, you have to tip your cap to Florida for what they’ve done thus far.  Their schedule is a total gauntlet.

Texas Tech has done literally nothing to deserve being ranked this high, all they did was expose West Virginia as a fraudulent team that wasn’t nearly as good as everyone anticipated that they would be.  Oregon State, still the same old story.  As soon as they play someone real they are going to get exposed.  The Pac-12 has two solid teams, and Oregon State ain’t one of them. 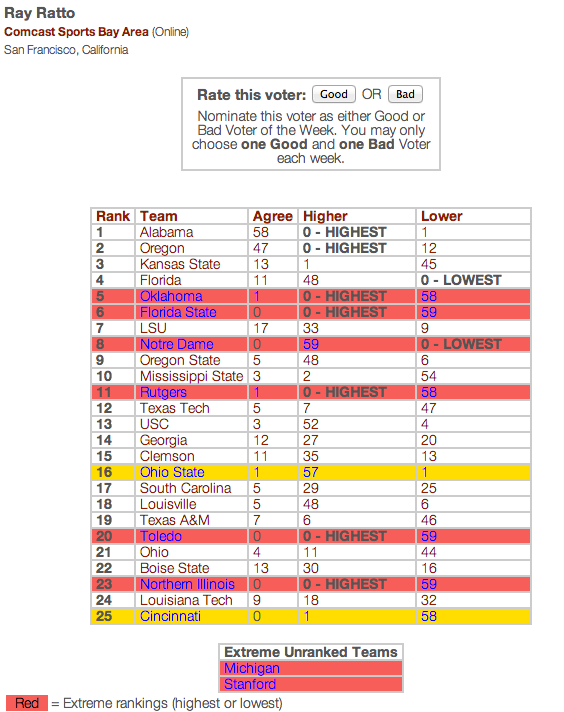 Ray is another returner we’ve got here and his poll is pretty bad, but I must say even though he ranks some teams the highest and lowest in his Top 10, I don’t hate it.  It’s the 11-25 range that’s got me pretty confused.  Let’s go through the issues here: Rutgers #11, Texas Tech #12, Toledo #20, Ohio #21, Northern Illinois #23, Louisiana Tech #24, and then Michigan and Stanford not even ranked.

As I’ve been saying, any Big East team in the Top 15 is a joke, I mean honestly.  No one in that conference plays any real ranked teams.  Then you throw in a bunch of garbage teams that don’t have any real victories at the end of the top 25 and ignore Michigan and Stanford?  Stanford beat your #13 ranked team, sure it was at home, but that is worth far more than anything on Ohio’s resume.  Also, Michigan unranked? I would agree with that if it had been after the Notre Dame loss, but they’ve earned being ranked again. 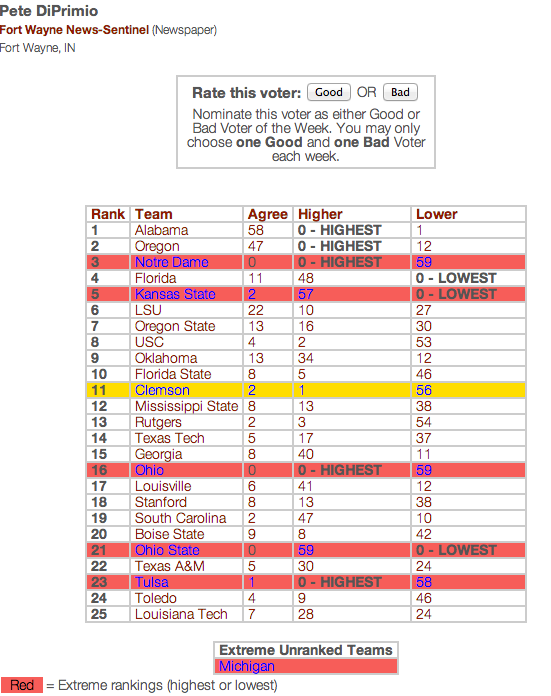 Yeah, this guy winning could be a bit bias on my part, but Jon Wilner’s poll isn’t bad this week, I’ve included it at the end for anyone that wants to check it out.  I thought that Wilner would be able to medal the first time that he didn’t win, but he seems to have turned off most of the irrationality for this week and I actually like his poll.

Instead my man Pete stepped up and did one of the most illogical things I’ve ever seen.  Based on this man’s poll he has Notre Dame completely overrated at #3.  I would love to hear his logic.  Sure they’re undefeated, but based on his poll they haven’t beaten a ranked team, with the exception of #16 Stanford in a controversial game that went to overtime.  So based on his poll, Notre Dame should be overrated, but he’s from Indiana and is in all likelihood a Fighting Irish Fan.

Stanford put up losses against Washington and then Notre Dame on the road, with a signature victory against his #8, USC.  No qualm there, they should be ranked based on his poll.

South Carolina put up losses against LSU and Florida, both in his Top 6, while beating his #15 Georgia, again no qualm here.

Texas A&M losses also against LSU and Florida with their big signature win coming against #25 Louisiana Tech.  Here is the problem.

Michigan should not be unranked.  They haven’t looked great, but based on Pete’s poll, he expresses little rationality.  A team with a loss on a neutral site to your #1 team and a loss on the road by a touchdown to your #3 team, does not constitute a team being unranked.  Putting Ohio #16, Ohio State #21 and Tulsa #23 even amplifies this.  Ohio is undefeated, but they haven’t beaten a ranked team.  Ohio State is undefeated and hasn’t beaten a ranked team, but how can you possibly think that Ohio is better than Ohio State?  Do you have brain damage?  This crap is beyond frustrating, simply because this guys vote counts.

Now onto Jon Wilner’s poll.  This man deserves honorable mention because of his track record, but there wasn’t anything overly heinous this week. 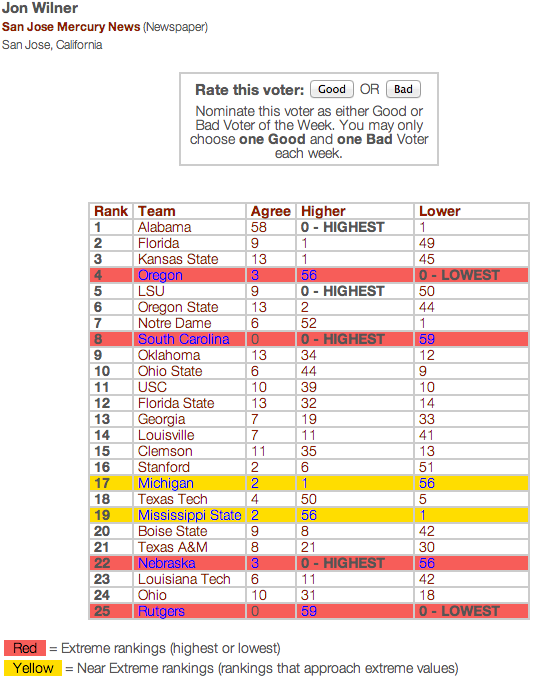 Honestly, other than Oregon State at #6 and Mississippi State being ranked #19, instead of perhaps #14, there’s not much to gripe with here.  It would simply be nitpicking.  It’s about time he got his act together.