The BCS Computer Polls are shameful

The computer polls are a joke.  They’re labelled with garbage statements like “unbiased,” and talk about their formulas and how they’re better than people voters, but they’re not.  They’re just as bad.  Any poll that has Kansas State #1 or Notre Dame #1, should be immediately disqualified and the person that created it should be deported to North Korea.  Honestly though, why won’t common sense play a factor in any of the polls?

The BCS has a huge description on the rules and how the polls are accounted for on this website, and thankfully, the poll drops the highest and lowest rankings for teams in the computer polls.  Here it is for the lazy people. 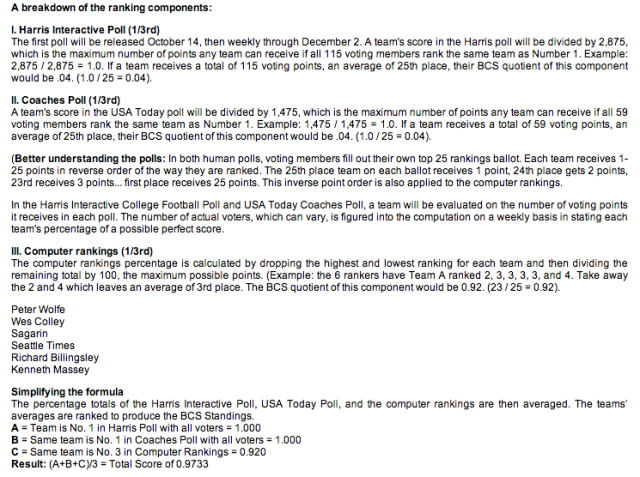 This is the Jeff Anderson and Chris Hester poll, and if they are being paid by the BCS for this poll then I hope they are being paid to be this brutal (in all honesty, I hope nobody gets paid to make these computer polls because they’re an atrocity).  I am a huge advocate of strength of schedule, but not when a poll has the Big Ten ranked as the third best conference this year, and the SEC is behind the Big 12.

This poll doesn’t even make sense.  I’m literally looking at it and I have no idea why it says what it does.

The most accurate conference rankings….really?  Are you sure you want to stand by that statement?  Their conference ranking is one of the most egregious and ridiculous things I have ever looked at.  This poll claims that they use strength of schedule, but what they forget to clarify is that they are damn morons and do not know what a proper strength of schedule is or how to utilize one in their rankings.  Oregon State hasn’t beaten a team in our current Top 25, but because they are undefeated and beat teams that used to be ranked, we’re going to put them #4.  Right, nice work clowns.

Richard Billingsley and his computer poll are actually one of the better ones.  Another complicated process and formula that you can find here.  His process and idea are sound, he thinks that strength of schedule should include more than just wins and losses, which is actually an intelligent thought.  But, he loses me when he says that being undefeated is a ticket to the top 10.

His poll isn’t actually terrible in the grand scheme of it all, and this new poll is certainly better than his poll after week #1.

The Massey Ratings.  In short, this is another guy should lose his poll privileges ASAP.  If you look at the change from week to week, based on what it says here, this means that Alabama was ranked #7 last week, which is one of the most irrational things I’ve ever heard.

Basically, with the way these polls take into account strength of schedule, teams that play easy games, prior to conference play get screwed over if their conference is top heavy.  Oregon and USC are prime examples of two teams that get screwed over by this.  It’s not their fault, who picks up the phone and calls up Oregon and wants to play them non-conference?  Teams that do this are only teams that have nothing to lose, like Boise State.  If Boise State wins they look awesome and if they lose, everyone expected them too and it doesn’t matter.  I wish Michigan had never scheduled Oregon in 2007, that offense with Dennis Dixon was nasty.

The description of his rankings is 21 pages long and it includes a ton of math formulas that make no sense to me.  What I can tell you, is that this is one of the worst polls of the bunch.  His top 12 is a criminal offense.  Here are a few of his claims:

Common sense results?  Then why is Alabama not ranked #1?  All the polls that don’t use a pre-season ranking are complete trash, and half of these polls that use strength of schedule don’t even know what they’re talking about.  Also, the Colley Matrix seems to have a serious bias towards Notre Dame.  In the five examples he provided, showing “common sense” results, Notre Dame is one of the most overrated teams in the entire poll.

Sure the polls at the end of the year are similar, but that’s because the BCS has more or less determined and said who was the national champion, and so all of the polls end up the same.

Peter Wolfe, a valiant effort, but of course another colossal failure.  His poll description is sort of helpful, but it’s childish, saying that comparing teams sportsmanship should be taken into account and running up the score should not be included.  I can understand not including margin of victory against lower division teams, but look at what Oklahoma did to Texas this past weekend, how does that not get taken into account?  Because it’s poor sportsmanship?  Sure, you don’t want to see guys taking cheap shots, but that is completely different than putting in your backups and having them continue to score.  It’s not the Sooners fault that their backups could keep scoring on the Longhorns starters.  Life can’t always be fair, not everyone gets a gold star, this isn’t elementary school.  Life’s tough, get a helmet; and above all else, make a better poll. 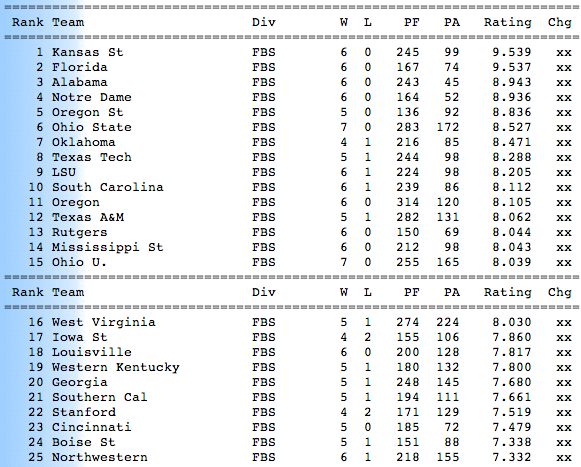 Like, what the hell am I looking at?  Kansas State #1, Oregon St #5, Texas Tech #8, Texas A&M #11, the Ohio Bobcats at #15, Iowa State at #17 and Western Kentucky (?!?!?!) at #19?  This thing is damn atrocious, it doesn’t even show any logic.  If margin of victory is not taken into account, then why do you list points for and points against right before their rating?  This man should take his computer and toss it onto the highway, it couldn’t hurt his rankings any.

The last computer poll up is Jeff Sagarin, and he works for USA Today, but has designed his own method.  His poll is iffy, and of course, goes through a complicated process.

Basically he combines the red rating and the blue rating to get the purple one.  His poll has some very good ratings, and then others that make you scratch your head.  Texas A&M #7, Arizona State #11, TCU #13 and West Virginia #26 are some solid examples.  His poll is definitely one of the most complicated, and it’s a shame that all of this complication and extrapolating of formulas can’t create a better and more logical poll.

Like I said earlier, it’s a good thing they toss out a team’s highest and lowest rating in the computer poll before averaging them.  It still doesn’t help them create a better poll, but it’s at least interesting to see everything side-by-side.  Getting able to see the lunacy all together makes things sort of clearer, well, not really.

What can be learned from this?  The computer polls hate the ACC and the Big Ten, but have an absolute chubby for the Big 12 and Notre Dame.  Quite frankly, it’s frustrating, but there is a strong chance that it won’t matter.  I think everyone is playing for second after what I’ve seen from Alabama, and of course, the SEC is going to end up beating up on itself and having teams bumped out of the title race.  Everyone hates hearing about how awesome the SEC is and stuff, but people need to realize that the SEC is head and shoulders above everyone else.  They’re one of the few things that I will defend ESPN for is their emphatic love for the SEC.  The SEC is just THAT good; Tim Tebow and the NBA though, they’re on their own with.

Looking at all of these polls in depth is a big help, but I wish they had better explanations, or more lam ens terms explanations.  Particularly, when it comes down to 21 pages of formulas that do nothing but tell me that you don’t know anything about football.  I really wish that I could just be the one to create the BCS rankings, it would make life a lot less frustrating.

Take it for what it’s worth.

1 Response to The BCS Computer Polls are shameful