This week we have some new medalists for the AP Poll Olympics, there was some solid competition for the Bronze this week, but the Gold and Silver medal winners were complete runaways. 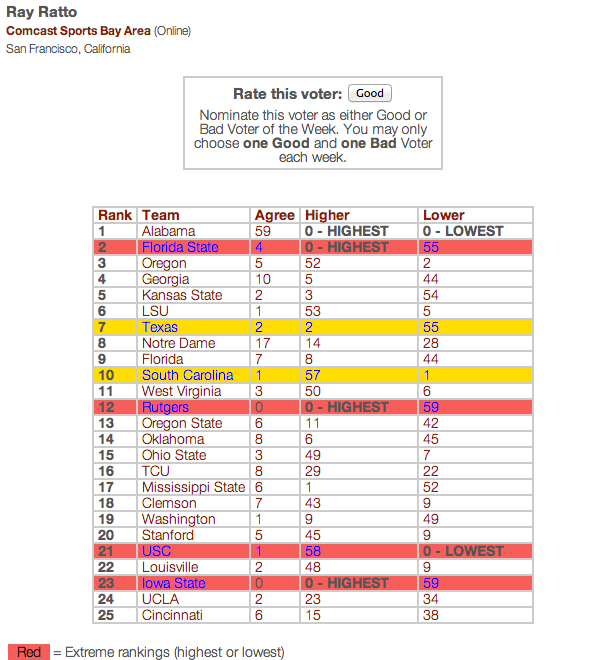 Congrats on your first Bronze Ray.  Seriously, as a California writer I figured he would have USC in a normal place, but he ranks them the lowest of any of the AP writers.  #21 seriously?  They lost one game on the road to a decent Stanford team.  They still have the best receiver combination in the country, and one of the two best quarterbacks in the country.  Then you have Rutgers at #12?  Please.  No Big East team should be ranked above 20.  That conference is full of frauds and teams that will fall flat on their face.  Except for Louisville, they have the easiest schedule in the country and according to Josh Vega, will go undefeated.  I don’t think they’ll be able to do that, but they definitely have a shot at it.

Again, congrats to Glenn, his first career Silver Medal.  This guy burst onto the scene out of nowhere with his stupidity.  This guy has made a complete mockery of the polls with this ballot.  Michigan and Michigan State shouldn’t be ranked above #24 or #25 anymore, they’ve both lost twice and performed terribly in those losses.  Clemson is a top 15 team and so is Florida, yet why are they so far back in the polls?  Washington at #12?  They have only beat one team, and that was an incredibly overrated Stanford team, give me a break man.  The win wasn’t even on the road, it was at home.  Ohio State #8?  Who have they beaten?  Some garbage teams like Miami and UAB and then a one-dimensional Michigan State team?  This guy is a complete joke and should be ashamed of himself.

This guy is gonna give me a stroke.  Bar none, the worst AP Poll voter in the history of the planet.  This guy is the first two-time gold medalist and he is not going anywhere.  It’s not like he just burst onto the scene, this guy is the reason I created this weekly post and he has been listed in every post I’ve ever written about how bad someones AP poll is.  I hate this man with a fiery passion and I wish someone would take away his vote so he stops embarrassing himself and his family.

And it’s not just me, 440 people gave this guy a bad poll rating.  The 25 people that gave him a vote for having a good poll are either family members or people who suffered brain damage while texting and driving.  Literally some of the dumbest people alive.  I don’t even feel like going into all of these rankings individually.  It’s literally too ridiculous.  Kansas State #4, Notre Dame #5, Florida State #8, Oregon State #10, Louisville #12, West Virginia #13, Michigan #14, Michigan State #16, UCLA #17, USC #20, Texas #22, Tennessee #23; all of these are wrong.

West Virginia and Florida State would take Kansas State, Notre Dame, Oregon State and Louisville to the woodshed.  They would literally beat them like a red-headed step child.  Just like USC would take Michigan, Michigan State and UCLA to the woodshed.  USC would destroy our horrific secondary; Matt Barkley would pass for 650 yards and 8 TDs, aka Geno Smith numbers.  It would be horrible to watch and I would probably be scarred for life.  It’s just a shame that people like this have a right to vote in not only AP Poll, this man is a degenerate and his college football resume is fraudulent.