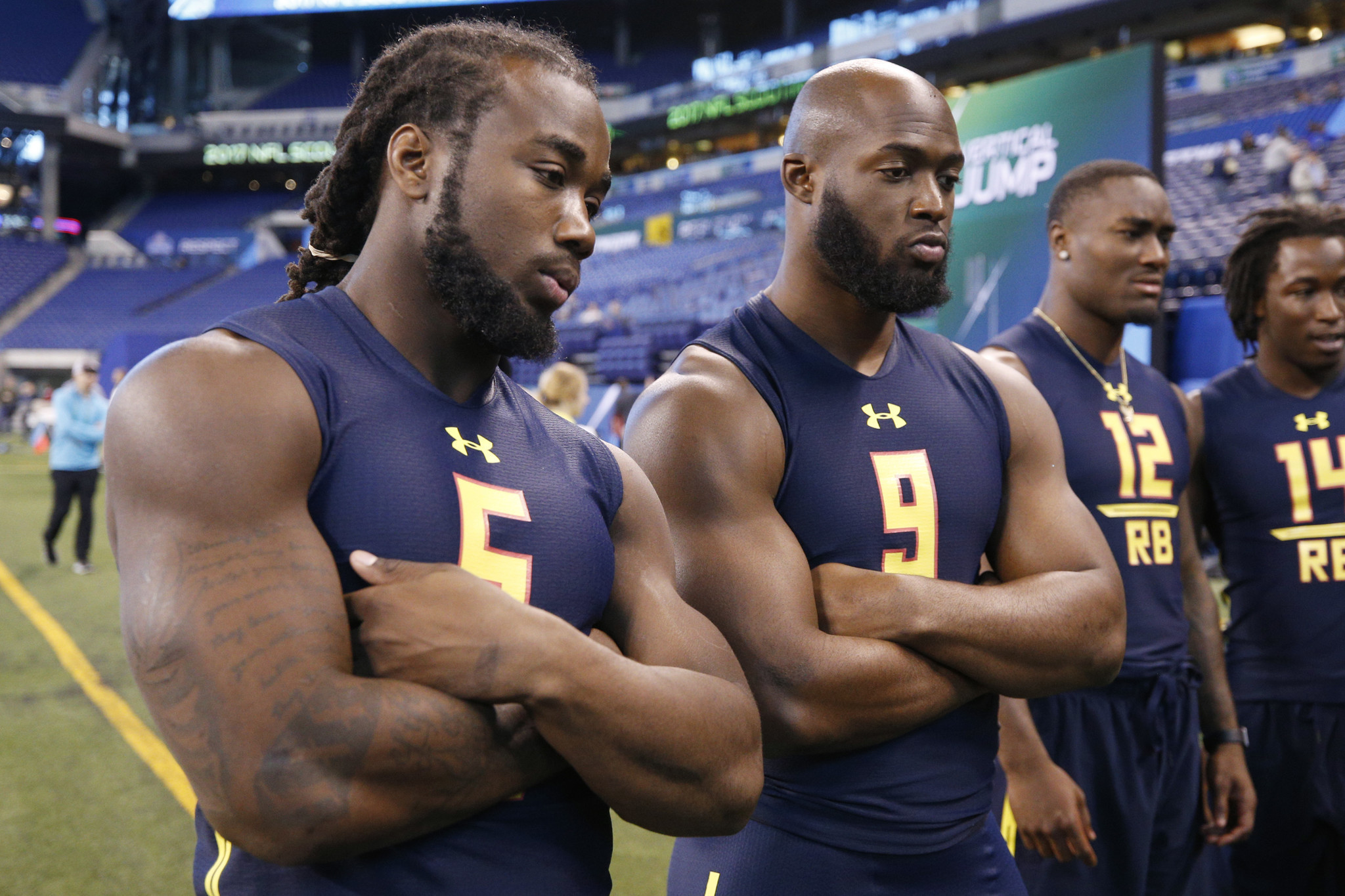 The NFL Scouting Combine is always a favorite time of year for me. Anything that is part of the Draft process for any sport has always intrigued me. And now when we’re getting to a time where players are bigger and more athletic than ever, you can see some truly eye-popping testing numbers. As always, game film is more important than Combine numbers, but it usually raises questions if a players tape is better than his testing. At any rate, this is just a piece of the process that smart analysts use to help them properly evaluate players and not to make a knee-jerk reaction off of.

The offensive line class this year is shorter on high-end talent than normal but there is still depth to it. Conversely, this is one of the deepest running back classes in recent history. Outside of Cam Robinson or Ryan Ramczyk, I’m not sure I see a tackle going in the first round. Garrett Bolles may sneak in there and Forrest Lamp is going to be a guard in the NFL, so at best I’m thinking four guys at the max at the moment. Alright, now obviously it has taken me longer than usual to get to these posts because of my schedule, so I’m going to try to keep these posts relatively short/brief.

Let’s take a look at the OL measurables (you can see the full interactive sheet here via Mike Loyko):

Cam Robinson, OT, Alabama: Robinson is a player that has been highly touted ever since he came in and started at Alabama as a true freshman. Robinson is 6’6″ 322 so his 1.78 10-yard split in the 40 is pretty good. He didn’t bench and his vertical and broad jump numbers were actually below the NFL Combine positional averages. He’s a guy that didn’t do anything to help himself, but didn’t hurt himself either. He’ll likely be the first tackle off the board.

Now normally I would insert some of my own YouTube videos of the Combine, but the NFL actually put in a couple of copyright claims in on some of my past Combine videos sooooo we don’t need to mess around with that anymore.

Forrest Lamp, OG, WKU: Lamp could end up playing tackle or guard but I think his future lies inside. He put up 34 reps on the bench, had a 27.5″ vertical and a 9’3″ broad jump. All of which are above the positional average and are a good base line for the big time guard.

Garrett Bolles, OT, Utah: Bolles is a guy that you’re going to want to familiarize yourself with. I think he is a lock to go in the first round at this point. He didn’t lift, but he posted solid numbers (28″ vertical and 9’1″ broad jump) and did nothing to hurt his stock that has continued to rise this offseason.

Zach Banner, OT, USC: Banner is a guy that you would think should be a first round tackle based on size but he is just awful. His movement skills looked terrible during drills and quite frankly he’s just too big. He’s not explosive and he ends up just looking like a giant turnstile.

Tayler Moton, OT, Western Michigan: Moton is a player that is going to go higher than most people think. At 6’5″ 319 lbs, he’s got very good size for a tackle, and despite only 23 reps on the bench, he posted a 30.5″ vertical and 9’1″ broad jump. His arm length is right on the positional average for a tackle, which lowers the expectation for the bench press.

Alright and now let’s shift gears to some Running Backs.

Dalvin Cook, RB, FSU: Cook had an absolute nightmare of a day at the Combine. He’s a first round pick in a lot of people’s eyes, but the lack of athleticism he showcased is a concern. Obviously his tape speaks for itself, but a 4.49 40, 30’5″ vertical and a 9’8″ broad jump do not match his tape at all.

Leonard Fournette, RB, LSU: Fournette weighed in at 6′ 240 lbs (!!) and ended up running a 4.51 40 which is moving for that weight. He only posted a 28.5″ vertical but he’s not a jumper (his words, not mine). He looked good during drills and caught the ball better than I thought. I still prefer McCaffrey, but Fournette is a round 1 lock.

Alvin Kamara, RB, Tennessee: His 40 time was slower than I anticipated, but the guy is an explosive athlete. He only ran a 4.56 40, but he posted a silly 39.5″ vertical and a 10’11” broad jump. Kamara is going to end up going in the first three rounds, purely off of athletic ability.

Christian McCaffrey, RB, Stanford: McCaffrey is one of my favorite players in the Draft and I’m still bitter that he got hosed in the Heisman voting two years ago. McCaffrey is an absolute freak and is going to be one helluva weapon for someone. At 5’11” 202 lbs, he ran a 4.48 40 with a 37.5″ vertical and a 10’1″ broad jump. He looked the most natural of any of the running backs catching the football during drills and he moved so smoothly with the ball in his hands. He’s got a lot of LeSean McCoy in his game and I think his testing numbers matched the tape quite well. Round 1 lock. Book it.