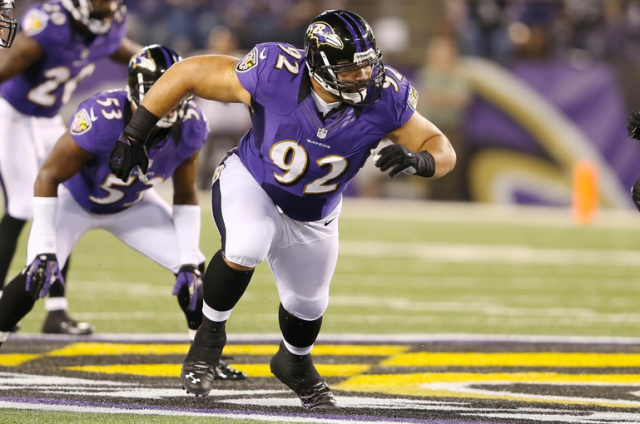 Okay, so forget about what I said about the Lions not having a backup plan/not having a good one. Martin Mayhew sure gave me the finger on this one and clearly knows what he is doing. In case you didn’t know the details, the Lions traded a 2015 4th round pick and a 2015 5th round pick to the Baltimore Ravens for Haloti Ngata and a 7th round pick.

I thought that if the Ravens cut Ngata that the Lions could target him, but I never imagined they would go out and trade for him. This was one helluva power move by Mayhew and the Lions. They still have $8.5 million in cap space, so they can still address other positions of need, with defensive tackle still being one of them. And Ngata, while older than Ndamukong Suh, is still more productive than anything you would have gotten in the 4th or 5th round. Ngata is currently 31 years old and is in the last year of his current deal, so I would expect the Lions would look to sign him to a 3-4 year extension; with most of that money coming in the first two years. Hats off to Martin Mayhew here, honestly. I was totally wrong about him.

That being said, how nice would a Haloti Ngata-Aaron Donald combo be in the middle? But I digress.

I would say the number one question on most Lions fans mind right now is do the Lions transition to a 3-4 defense? Ngata is a sturdy 3-4 nose tackle, but a man of his caliber can transition to a three-tech position. Not to mention that a nose tackle is plenty capable of playing in a 4-3 defense too. I would honestly expect a hybrid defense, like the one Michigan is going to use this year, that has both 3-4 and 4-3 formations during games. They have a lot of flexibility/versatility on defense right now.

Ozzie Newsome on Haloti Ngata: 'He consistently showed tremendous leadership in our locker room and on the field.'

How easy of a transition from a 4-3 to a 3-4 could it be? Well for the Lions it would be quite easy given the personnel that they already have on their defense. Having a nose tackle is the critical piece, and Ngata is still an elite player. A nose tackle was really the only piece they were missing to move to a 3-4 and now they have one.

The Lions get Ngata coming off his best season of the PFF era (2007 onwards) https://t.co/pslaFSEF6O pic.twitter.com/NNldisqaND

The Lions are also extremely deep at defensive end and linebacker. Jason Jones and Devin Taylor are certainly big enough to play DE in a 3-4, while Ziggy Ansah would likely stand up and play as a rush LB. Ansah is also athletic enough that he could play defensive end in a 3-4, so he provides a lot of versatility as a pass rusher. DeAndre Levy and Josh Bynes (who the Lions just re-signed) could play outside linebacker in a 3-4, as could Kyle Van Noy. While Stephen Tulloch and Tahir Whitehead would make for a formidable pair in the middle. Tulloch excels in coverage and Whitehead is great at attacking the ball downhill. It would be a perfect tandem, honestly. The secondary doesn’t get effected nearly as much by the switch, and both safeties (Glover Quin and James Ihedigbo) played in a 3-4 on their previous teams. It’s almost a no-brainer to switch, normally it isn’t this easy of a transition. Outside of some terminology, I don’t see any immediate issues that would come to light. Defensive Coordinator Teryl Austin was the secondary coach in Baltimore, so he knows what is needed to go into a 3-4, so I would expect a lot of the offseason talk to now discuss this switch.

In other NFL news, today was wild with the Seahawks trading Pro Bowl center Max Unger and a 1st rounder to the Saints for Jimmy Graham and a 4th rounder. And the Rams traded Sam Bradford and a pick to the Eagles for Nick Foles. The Seahawks offense just got a lot more dynamic, and they must be certain they can easily replace Unger. I thought at first that the Saints made the trade because they are currently in salary cap hell and their team is going to be in shambles, but this move actually eats up $2.5 million more in room…so I don’t get it. The Eagles-Rams trade is also a head-scratcher, but Chip Kelly must really like Bradford.