It’s really a good thing that there are so many AP voters that a handful of voters won’t end up making a huge difference because these same old clowns just keep at it.  Perhaps the Associated Press could get some college football coaches to teach a class in the offseason and let voters know what is actually a good football team and how to recognize one.

Drew Sharp, the bias piece of garbage, has two teams ahead of Michigan that have yet to beat a ranked opponent.  I’m not saying he needs to have Michigan top 15 or anything after that massive debacle against Akron, but to not even rank them?  Try pretending you’re an unbias journalist that is halfway decent at your job.  At least the rest of the poll makes some sort of sense. 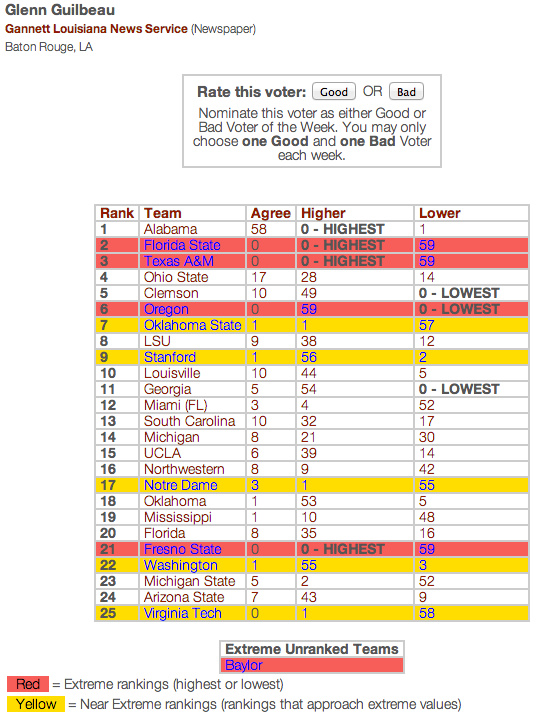 Glenn is still far too high on Florida State, Oklahoma State, and Fresno State while low-balling Oregon and Baylor.  I do give him credit for leaving Texas A&M in the top 3 following their close loss to Alabama, but until he moves Florida State and Oklahoma State down, his poll is still going to be frowned upon.

Jon was a staple last year in the Olympics and it seems he has decided he wanted to get back in and start earning a few of his medals again.  Like Glenn, he undervalues Baylor, but rather than overrate Florida State, he completely underrates them and then overrates UCLA.  I would love to know what the Bruins have done to deserve a top 5 spot.  Texas A&M also has no business being outside of the top 10.

Doug is going nowhere fast, though he finally gave Alabama their due and put them in the top spot.  That being said, putting Miami in the top 3 and keeping Michigan in the top 10 is absurd.  Washington and Texas Tech are also extremely overrated by Doug, while giving Stanford the shaft.  I’m not sure how anyone can put Michigan in the top 10 still after their performance against Akron.